Apple is approaching its tenth year of exploding laptop batteries and might be fine with telling customers that its batteries bursting apart is "expected behavior." But believe me, it's far from expected, routine or safe when it actually happens. 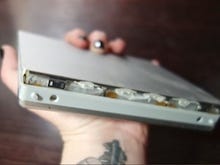 I noticed my MacBook Pro wasn't sitting right on its shelf. I took a closer look, and saw that the battery had exploded, ruptured out of the laptop's casing, and had ripped apart at the seams.

It was hot to the touch.

Looking at the hundreds of current posts from unhappy customers with exploded batteries, in-laptop battery explosion seems to be a common problem.

"Apple Support calls this a feature," wrote one person. "Because it prevented the battery from exploding and burning the house down while we were completely unaware Apple batteries did that when NOT IN USE."

My MacBook was in daily use — and still is, but now it runs without its battery.

My 2008 MacBook Pro (15-inch) went from being a work laptop to my TV laptop in 2011, when I put it to work running all Internet operations related to my flatscreen TV.

It is on most days, and I put it to sleep or shut it off when I sleep or leave my flat. It sits under the TV, and I control it with screen sharing.

Apple says the $129 battery is actually expected to fail — and we are supposed to buy new ones every year.

In 2010, Australian software engineer Chris Mountford made the same discovery on the same MacBook Pro model and year. When he found that his battery had, like mine, blown up in the laptop, he took it to Apple and was rudely awakened to hear that this, according to Apple, is "expected behavior."

Apple's apathy toward the problem seems to be sadly universal; in 2011 another exploding battery victim went through a bit of run-around before being told that batteries blowing up in MacBooks is "normal."

He wrote to Consumerist:

Apple's "official position" is that their batteries WILL expand and destroy your computer.

Especially after they outlive their (and I quote) "optimistic, one year lifespan."

Apple's party line is that an exploding battery in their non-exploding consumer devices is normal, and that's what people around the world are being told.

Apple has moved toward phasing out removable batteries, and it's a good thing that this one is, indeed, removable — my MacBook is still in operation at this very moment, running Netflix on my TV.

Otherwise, I'd be out a laptop.

The MacBook is currently running connected to the charger while its caustic, hazardous battery is on a metal chair in the backyard.

Apple's swelling batteries are toxic to humans, and the vented gas is flammable and corrosive.

Lithium Polymer batteries are not as bad as most batteries in terms of toxicity, but when handling a burst battery, never touch your mouth, nose and eyes; wash your hands thoroughly, and stay in a ventilated area.

Apple's updated Mac Pro is another win for AMD

Apple has finally announced an update to the aging Mac Pro desktop workstation, and it is another win for AMD.

Battery supplier Max Amps warns on its Lithium Polymer Battery Care page: "If the electrolyte in the cells should get on your skin, thoroughly wash with soap and water. If in the eyes, rinse thoroughly with cool water."

"Immediately seek medical attention for this, or for burns," it adds.

There may have been no combustive explosion when my MacBook's battery blew its casing open. But that's only because it didn't catch fire. This function of materials, while appreciated, is not exactly soothing.

It requires a Li-Po specific charger to avoid fire and explosion, and overcharging or short-circuiting one will indeed cause a fire.

Its cells are designed to balloon out on reaching a dangerous state, forcing the case to crack open, in order to prevent the cell from losing its seal and catching fire.

They can reach this state from either a fault in the manufacturing, "bad" storage of the battery (too much or not enough charging), or age.

The battery must be fully discharged (mine, unfortunately as you can see above, is not).

Taking it to a place with a battery recycling program is recommended; if you visit an Apple store, Apple will recycle it for you.

Li-Po batteries are commonly used in the radio-controlled car and aircraft worlds. Users charge and store their batteries in fireproof bags, and stories can easily be found on RC forums about fiery battery explosions — some while in normal operation.

Lithium Polymer battery materials safety sheets state that Li-Po fires should be extinguished with foam or dry powder; water can be used, but when water is used it can create explosive hydrogen gas.

RC Club of Houston tells readers that after discharging a Li-Po battery — or if the cells are damaged — you should:

Submerse the battery into bucket or tub of salt water. This container should have a lid, but it should not need to be air-tight.

Prepare a plastic container (do not use metal) of cold water. And mix in 1/2 cup of salt per gallon of water. Drop the battery into the salt water.

Allow the battery to remain in the tub of salt water for at least 24 hours if already discharged to 1.0v per cell or 2 weeks if still charged.

Remove the Li-Po battery from the salt water, wrap it in newspaper or paper towels and place it in the normal trash. [Now] they are landfill safe.

I didn't know the risks my MacBook Pro battery carried, or that I should expect it to fail — and fail often.

It's really disappointing to discover such a significant hardware and customer satisfaction issue — Apple's problematic and dysfunctional batteries — in so many forums and in blog posts while researching what happened in my living room.

It is not an uncommon, or unconventional problem.

But in learning of Apple's unwillingness to openly address something so talked about, so repetitive — and its complete willingness to add it to their profit model — is at once luridly absurd, and profoundly disturbing.