By Zack Whittaker for Between the Lines | February 17, 2015 | Topic: Mobility

Apple has requested as many as six million Apple Watch wearables from its suppliers in Asia. 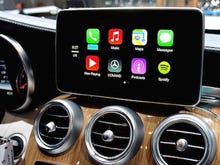 Apple's automotive headache: How can it make money off a car?

Apple would struggle to maintain profit margins by selling cars -- a one time purchase every five to 10 years. But there are a few ways around that conundrum.

The wrist-wearable -- the first of the company's kind -- is expected to arrive in Apple retail stores by the end of April.

The Wall Street Journal, citing a person familiar with the plans, first reported the news.

As for demand, will it be enough? The report said half of the production will be earmarked for the Apple Sport entry model, while one-third of output will be the mid-tiered Apple Watch. That leaves suppliers producing as many as one million high-end Apple Watch Edition wearables each quarter. That could be increased as demand in China is expected to rocket, said the report.

It's not clear exactly how Apple Watch will be received. The report says Apple can adjust its production plans quickly to increase output, or decrease it -- so inventory and stock doesn't pile up in the back of stores.

News also emerged last week that Apple may be building its own self-driving car in a bid to compete with Tesla and Google.

By Zack Whittaker for Between the Lines | February 17, 2015 | Topic: Mobility