Both Apple and Microsoft began investigating reports that those running iOS 6.1 update caused overloading on corporate Exchange email servers. Some enterprises complained that their newly updated iPhone or iPad  were "causing excessive logging" on the server . As soon as the iOS 6.1-powered device was switched off, the problem mysteriously went away. 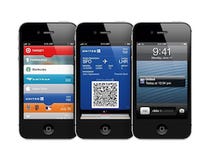 The iPhone and iPad maker has released a software update for iPhone 4S users, after U.K. and European cell networks warned iPhone users to avoid the latest iOS 6.1 version.

But the affects of the bug also caused the battery life on the iPhone or iPad to suffer significantly.

Microsoft came up  with a few ideas to prevent the overloading , such as switching off the calendar function altogether or simply banning all iOS 6.1 users from accessing the network.

iOS 6.1.2 arrives on shiny rectangles of multiple sizes just over week after iOS 6.1.1 was released , which fixed cellular performance and reliability problems for iPhone 4S users.

Some iPhone 4S users in Europe complained that the latest upgrade caused cellular and 3G networking to degrade. U.K. and European carriers sent out text messages to customers warning them not to update to the latest version of the mobile platform as it was causing their own networks to suffer.

But Apple then said it would fix yet another issue—this time a security bug that allows anyone to bypass the security lock screen on the device with a few steps .