More evolution than revolution, but Apple could have unveiled last year’s products again and still be ahead of the game.
Written by Adrian Kingsley-Hughes, Contributor on April 20, 2021 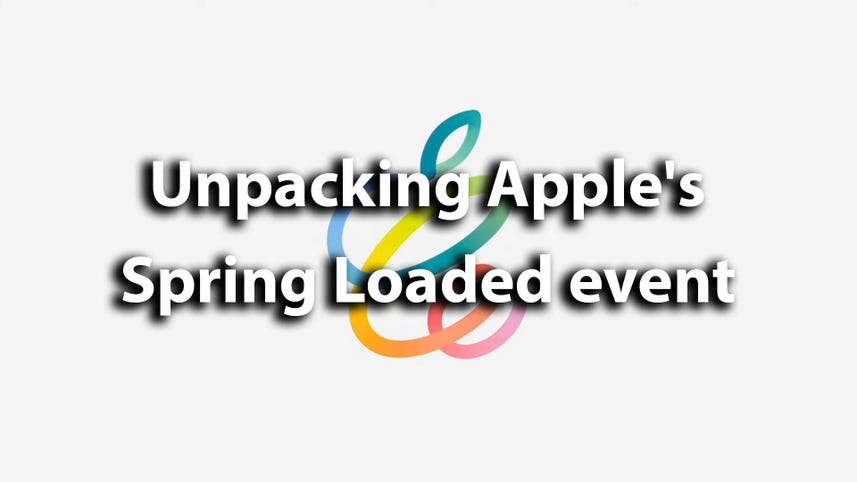 Apple's long-anticipated Spring Loaded event (which had been rumored to be a March event), is over, and it was indeed a loaded event. More evolution than revolution, but given that Apple doesn't have much in the way of serious competition, it could have unveiled last year's products again and still be ahead of the game.

Apple is in a place where the transition to M1 Apple Silicon is the thing shaping the future. Sure, we had the long-rumored AirTags (at $29, it's one of the cheapest things Apple sells), a new purple iPhone 12, Touch ID built into an external keyboard, 5G on the iPad Pro, and even an updated Apple TV, but the real star of the Spring Loaded event was the M1 chip.

Apple is going all-in with the M1, and while this even spent a lot of time covering the same ground as its M1 event back in November did, finally seeing it make its way into an iMac and an iPad Pro shows how far Apple has come in a short period of time.

To be honest, it's no surprise to see the iPad Pro's chip being an M1. It's a perfect fit for the chip and allows Apple to streamline its supply chain. Here's an iPad that's powered by the same chip that powers a MacBook Pro.

That's quite an achievement.

This event also gives us some hints as to what we might see coming in the fall iPhone 2021 event.

First, where does M1 leave the A-series chips found in the iPhone and other iPads? Will Apple unify all hardware under the Apple silicon banner? Seems likely.

The Center Stage feature that allows the ultrawide front camera on the iPad Pro to detect people and digitally zoom in and out to keep them in the frame also looks like a likely candidate for the 2021 iPhone, perhaps a Pro feature.

The iMac is also an indicator of a future where Macs are essentially not upgradable. Moving to M1 puts an end to RAM and storage upgrades. You buy a thing, run it until you outgrow it, and then throw it in the recycling bin and buy another.

It's what Apple has always wanted a computer to be, and M1 brings that day several steps closer.

We now have an iPad Pro that could, in theory, run macOS and everything else you run on an M1-powered Mac. This is going to raise all sorts of speculation as to whether macOS will come onto the iPad. There's a subset of users who would love a touch-controlled macOS, and while Apple is teasing us with this, I don't see that in the future.

The upgrading of the iPad Pro's USB-C to support Thunderbolt is also interesting. Rumors that this was happening had been circulating for some, and now that it's happened, I can't help but feel that it makes the Lightning port feel old and outdated. As much as I feel that swapping out the Lightning port for USB-C would cause problems, it's clear that there's not much more innovation coming to Lightning.

Laptops
Zendure SuperBase Pro 2000 hands-on: All the power you need