Along with HealthKit, one of the marquee features announced with the launch of iOS 8 was Apple's HomeKit, a home automation framework designed to get separate smart home devices talking to each other, all controlled centrally by a iPhone or iPad.

With the home automation market set to be worth $71bn by 2018, according to Juniper Research, it's no surprise that Apple is interested in staking its claim to the smart home in the same way it has the smartphone.

But for a long time after HomeKit launched, there was little sign of an ecosystem building around it or high profile supporters. There were also rumours of delays to its release, and speculation that a new Apple TV would be launched to double as a HomeKit hub, suggesting home automation might be anything but a home run for Apple.

Now, however, the first wave of HomeKit hardware products by third-party manufacturers are beginning to hit the shelves: the last couple of weeks have seen Philips launch its HomeKit Hue Bridge for controlling home lighting, while August has unveiled a HomeKit-connected door lock. These products join a handful of others from companies including Ecobee, Honeywell, Incipio, Insteon, and Lutron.

With partners taking care of the hardware, Apple recently tackled the software side of HomeKit, giving it a few more useful features in iOS 9: a more user-friendly set-up procedure, for example, and the introductions of 'scenes', where devices can be activated together - opening the garage door and turning on the front porch light at the same time, say. It's also brought HomeKit-compatibility with the latest WatchOS update, so you can control your home from your wrist.

With the software in place and hardware now trickling out, are we seeing the first coming of HomeKit - or a platform that's yet to, and may never, catch on?

NextMarket Insights is predicting the former, with 180 million HomeKit devices shipped by 2020. "Apple's track record of creating excitement for nascent markets is unparalleled," Michael Wolf, the company's chief analyst, wrote in a recent blog. "HomeKit will create awareness about the smart home among average consumers and will accelerate development in the category among home system, appliance, and service providers."

But, as Wolf highlights, the smart home is an area rich with competition: Google's Brillo, Nest's Weave, and Samsung's SmartThings are just three of the high-profile efforts by tech companies to make their own ecosystems the heart of the smart home.

For Ecobee, whose smart thermostat is HomeKit-compatible, when deciding which software partners to work with, the size of the potential ecosystem is a key factor.

"The phone you have in your pocket will be key to the connected devices you end up buying," Ecobee CEO Stuart Lombard told ZDNet. "As a manufacturer, there's lots of opportunity to be a part of many ecosystems. We want to focus on the ecosystem that really resonates with the consumer. The Apple installed base, the brand, and its gravitational pull are really important." 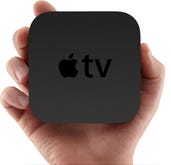 Joe Dada, CEO of Insteon, which makes a HomeKit-enabled device hub, agrees. "In the end, it comes down to simple math - do we think they're going to get significant penetration? Just being a big player doesn't guarantee anything, and a lot of efforts into this space have failed. We have to read the minds of the leaders inside these organisations and try to get a feeling for where they're going to go with this. Is this going to be a serious initiative they're going to stick with, or is there a chance they're not going to be serious about it?... There's a difference between [companies taking] a leadership role and 'we don't want to be left behind'."

Apple, the companies believe, is indeed serious about the industry, and the demography overlap between smart home enthusiasts and Apple users is clear: both are characterised by tech-savvy consumers with a higher than average income.

But while consumers may be happy to tie themselves into a single ecosystem with their smartphone, the decision to do the same with their home is more problematic - there could be a mixture of mobile operating systems running under a single roof, potentially leading to all sorts of compatibility problems. For those opting for a particular ecosystem, be it Apple or anything else, they need to make sure that framework not only works with their own, and their partner's and family's, smartphone operating system, but that it's also compatible with all the other home automation gear they already have.

And with Apple yet to release its own HomeKit app (though a trademark for an app called Home may suggest one is on the way), that leaves consumers having to deal with various third-party apps with differing set-up processes and attitudes to managing other players' HomeKit hardware.

For buyers, it may seem like smart home is still in the Wild West phase, with both consumers and manufacturers waiting to see who wins the 20-man bar fight. For now, hardware makers are hoping to keep everyone happy by working with multiple partners: Philips' Hue bulbs work with the Hue Android app as well as its HomeKit-enabled Bridge, while the majority of Insteon's many hardware devices can be managed by their respective Apple, Android, and Windows Phone apps.

"We think it will be 'one size fits all'. If you have to figure out which ecosystem works with what, and that [hardware] doesn't work with this [ecosystem] but it does with that, then that's not a great customer experience," Ecobee's Lombard said.

As it does with iOS apps looking to get onto the App Store, Apple has to certify all the hardware that wants to offer itself as HomeKit-compatible. The smartphone world may give us some indication as to whether Apple's more closed approach will prove popular with consumers. Look at it one way, and there are hundreds of millions of iPhone users happy with Apple's somewhat walled garden. Look at it the other way, and there are hundreds of millions more who prefer Android's arguably more open attitude.

There's no doubt that Apple will end up with a sizeable part of the smart home market but, as with mobile, it's unlikely to be the most popular player.

As NextMarket Insights' Wolf sums it up: "While HomeKit will certainly see traction, its ability to coalesce consumers and product manufacturers around a single unifying effort faces an uphill battle. Competing offerings from Google with Weave, Samsung's SmartThings, and industry-driven efforts such as AllSeen and UPnP are also jockeying to establish themselves with manufacturers and consumers alike. While HomeKit could soon be one of the leading platforms in smart home, it will by no means be the only platform."

Join Discussion for: Apple's assault on the smart home: Does HomeKit...