Apple's competitive set has swollen as the vertically integrated tech giant plays in more spaces. The formula works as long as Apple can keep innovating.
Written by Larry Dignan, Contributor on March 7, 2012

Apple's launch of its latest iPad illustrates how technology's most valuable company in terms of market capitalization competes with damn near everybody.

The rollout of the and HD iPad brought the usual pyrotechnics. The iPad features LTE with a whopping 9 hours of battery life on 4G---unheard of in the world of smartphones. A retina display also adds a differentiation point from rivals. There's also a new chip---the Apple A5X---that offers better performance. And the price tag---starting at $499---stays the same. For good measure, the iPad 2 now goes for $399 to start.

Reading between the lines of Apple CEO Tim Cook and Phil Schiller, marketing chief, it's clear that the company's competitive set has swollen as the vertically integrated tech giant plays in more spaces. The game for Apple is still the same---integrate hardware and software better than anyone and use the supply chain as a weapon---but the battlefield is immense.

Among the key nuggets from Apple's iPad event highlighting the competitive set.

PCs: Apple was more blatant than ever about its plan to lead the post-PC era. This fact is going to complicate PC upgrade cycles everywhere. The better specs the iPad gets the more it's going to look like a replacement for the laptop. It's possible that many companies will go for iPads over laptops.

PC makers: Cook took direct aim at HP, Dell, Acer and Lenovo in terms of units vs. the iPad. Apples and oranges so to speak? You bet. But Apple clearly sees the iPad as a way to hit its PC competition. Maybe it sells a few Macs on the way. 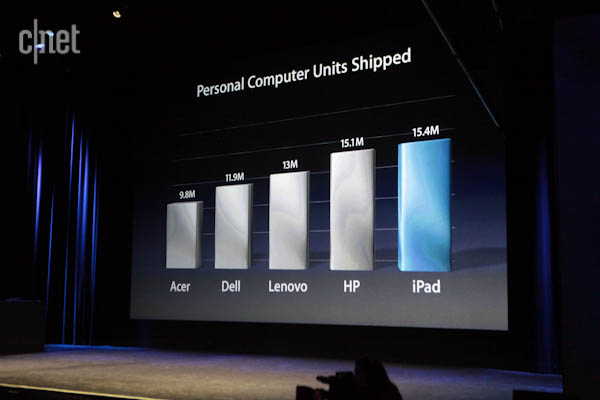 Samsung and Android tablets: Apple poked Samsung in the eye early on. A Twitter app was shown on a Samsung Android tablet. Cook noted that the Android app looked like a blown up smartphone version. It was. Apple is extending its lead in tablets. To make the price wars on tablets more interesting the iPad 2 will now start at $399.

Amazon and Barnes & Noble e-readers: Cook duly noted that reading e-books was a favorite activity on the iPad. With a retina display it's clear Apple has the pixels to compete with e-readers.

Digital video cameras: Apple executives noted the latest iPad has an enhanced iSight camera and a lens that will improve video. More interesting is the software integration that can shoot video and remix it easily in iMovie. Add it up and you have 1080p HD video camera with software built in.

There are a lot of rivals emerging for Apple. That formula works as long as it can keep delivering leapfrog technologies.