Some people believe a car tells a lot about its owner, so why not smartphones, one of the most personal devices we own?

Dozens of mobile analytics firms study Android and iOS users' preferences, location, and habits, but a group of psychologists claim to be the first to make a connection between the mobile platform of choice and personality.Delving into the psyche of smartphone owners, British psychology researchers say they found distinct differences in the personalities of Android and iPhone owners, after asking 500 of them how they felt about their phone. 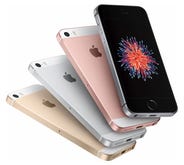 How Apple plans to make more money from its cheap iPhone Sitting out on the iPhone 7 while you wait for Apple to update the cheap but cheerful iPhone SE? You might be in for a long wait.

The study is detailed in a paper called, Predicting smartphone operating system from personality and individual differences, from psychology researchers at the University of Lincoln, Lancaster University, and the University of Hertfordshire.

They went looking for differences between iPhone and Android owners in honesty-humility, emotionality, extraversion, agreeableness, conscientiousness, openness, and whether people preferred to be unique, and whether they viewed their phone as a status symbol.

"In comparison to Android users, we found that iPhone owners are more likely to be female, younger, and increasingly concerned about their smartphone being viewed as a status object," they write.

That would seem to confirm the view that iPhone owners are anxious about appearances and willing to pay through the nose to satisfy their insecurities.

But if the findings really are generally applicable in the real world, job hunters might want to think twice before whipping out an iPhone at an interview for a service role or one where they'd be handling cash.

"Key differences in personality were also observed, with iPhone users displaying lower levels of honesty-humility and higher levels of emotionality," the researchers add.

That finding contrasts with Android owners who were more likely to be male, older, more honest, more agreeable, less likely to break rules for personal gain, and less interested in wealth and status.

According to notes announcing the research in September, it included two studies. The first study asked 240 smartphone owners to describe stereotypes of Android and iPhone owners. A second study involving 530 respondents tested members from each group against the stereotype.

"The results from the first study showed that Android users are perceived to have greater levels of honesty and humility, agreeableness and openness personality traits but are seen as less extroverted than iPhone users," the authors note.

"The results from the second study showed that most of the personality stereotypes did not occur in reality, as only honesty and humility was found in greater amounts within Android users."

Lancaster University's Dr David Ellis, one of the paper's lead authors, thinks iPhone owners probably scored low on honesty and humility because they appeared to be more materialistic.

"Those who score lower in honesty-humility are, among other things, more likely to be motivated by material gain. For iPhone users this may be driven by the fact that they are also more likely to view their phone as a status object," Ellis told ZDNet.

Join Discussion for: Are iPhone owners really less honest than...