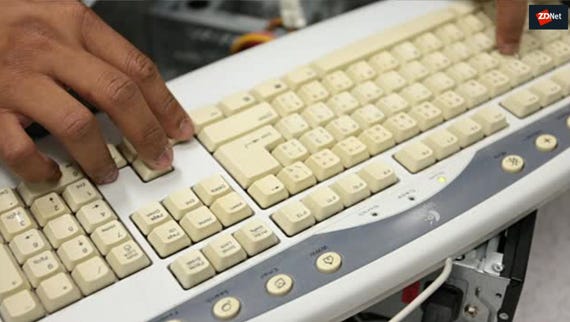 Is the desktop PC done? No, not at all
Watch Now

For an industry that was in freefall a decade ago, the PC market has managed to stabilize over the past few years.

According to IDC's Personal Computing Device Tracker, PC shipments recorded a total year-over-year decline of 0.2 percent in full year 2017 and were down 0.4 percent in 2018 in the face of a worldwide CPU shortage. In other words, pretty much a flat market going into the last year of the decade.

But a closer look at those numbers shows that not all PC makers are faring equally. In fact, over the past two years, the three largest PC makers have been increasing their share and even their unit shipments, as smaller manufacturers have struggled.

The following chart shows the combined market share during 2017 and 2018 for Lenovo, HP, and Dell, which collectively account for nearly two out of three traditional PCs (desktop, laptop, and workstation) sold worldwide.

Now look at the collective market share for all other PC manufacturers, including Acer (traditionally a distant fourth), Apple, ASUS, and other brands, the most intriguing of which is Microsoft with its Surface line.

Update: In the comments, someone asks why I called Microsoft's Surface line "intriguing." The most important reason is that the "Traditional PC" press releases on which these numbers are based do not include slate tablets or tablet-style devices with detachable keyboards. That means Microsoft's Surface Pro, Surface Go, and Surface Book lines are not included, although the Surface Laptop and Surface Studio are. Via email, an IDC spokesperson explains: "IDC combined the tablet and PC data into the Personal Computing Device (PCD) tracker starting with the Q4 2016 cycle (published in January 2017).  The Traditional PC data published in the press release is a sub-set of the PCD Tracker data."

As for unit sales, the following chart tells the tale. Here, too, the top three PC makers show a generally positive trajectory, with Acer and Apple far behind and basically flat. But that Others line slopes sharply downward.

I can think of a few good reasons why the rich are getting richer right now. For starters, the PC market is more focused on business and government today than ever before, especially with large organizations scurrying to replace old devices running Windows 7 before the end-of-support date that's now officially less than a year away. That's where all three companies have massive armies of salespeople who can write commercial contracts that cover hundreds of thousands or millions of seats at a time.

Meanwhile, the consumer market for PCs has all but vanished, with the exception of two groups: gamers and high-income professionals that still need the unique capabilities that a PC or Mac provides.

One other thought I had while going through these reports is that we don't really know what the replacement rate is for PCs right now. Microsoft routinely refers to a worldwide population of about 1.5 billion PCs. But the company has been repeating that number for at least six years, as far as I can tell, and there's really no way to measure whether consumers and businesses have been retiring one PC for every new one that's been sold since 2013 or so.

If I had to place my bet, I would guess that the retirement rate has been far in excess of the replacement rate in recent years and the total population of PCs has shrunk by a few hundred million from that 1.5 billion peak.

Zeroing in on that number might seem like a frivolous guessing game, but it has a major impact on what the PC landscape will look like in 2020. Based on information from its telemetry servers, Microsoft has already confirmed that the number of PCs running Windows 10 is well over 700 million. If the current worldwide installed base of Windows PCs and Macs is closer to 1 billion than 1.5 billion, the remaining population of Windows 7 PCs could shrink impressively in the next year.

Either way, don't be surprised if corporate demand helps make 2019 one last year of flat PC sales before those numbers head south again.

Microsoft puts Acer, Dell and Lenovo Windows 10 PCs for students in the spotlight
Seven new Windows 10 PCs, priced between $189 and $320, plus a new Microsoft Classroom Pen made exclusively for the education market, are among Microsoft's big bets for BETT 2019.

The most popular PC is in your pocket
While you weren't looking, the PC has morphed into even more personal devices. Industry analysts are ignoring this because, frankly, they need to reassure clients that their current and obsolete business models are viable. Which they aren't.

CES 2019: The best desktops on display
From Mac Pro clones to colorful gaming systems, here are a half-dozen PCs that stood out on the show floor amid a sea of laptops.

Join Discussion for: As the PC market continues to shrink slowly,...