A fresh recruit onto the tech journalism battlefield, Luke Hopewell is eager to see some action. After a tour of duty in the belly of the Telstra beast, he is keen to report big stories on the enterprise beat. 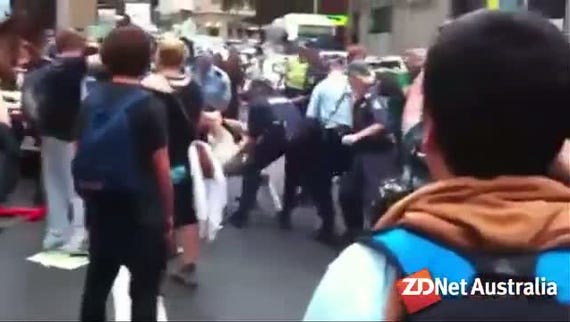 update Four men were arrested last night at a Sydney rally in aid of Wikileaks and its founder Julian Assange.

Crowds have rallied around the nation to support Wikileaks and its imprisoned founder, Julian Assange. (Credit: Luke Hopewell/ZDNet Australia)

The NSW Police yesterday issued a letter (PDF) to the organisers of the rally voicing its opposition to the action after the Support Wikileaks Coalition aired plans to march on the US Consulate at Martin Place.

According to the NSW Police Service, the group was given permission to march along the footpath towards the consulate at 7:30pm (AEDST) last night.

When the protest march arrived at the intersection of King Street, police allege that three protesters blocked the flow of traffic, which resulted in their arrest.

A fourth man then allegedly punched an officer and was subsequently charged with assault. He is set to appear in Downing Centre Local Court on 11 January 2011.

"We worked with the police to make sure everything was fine, but the use of mounted police and bringing dogs was a little bit unnecessary," Serkowski said.

"It seemed a bit antagonistic," he added.

Loewenstein agreed, saying that police were inflexible about the rally from the outset.

"The police were very inflexible about allowing [the march] to happen. There was a sense that they were trying to avoid any embarrassment while Oprah is in town," Loewenstein said.

Greens' MP David Shoebridge addressed the rally and also joined protesters in their march on the US Consulate.

He told ZDNet Australia that a wall of officers blocked the march along the footpath before organisers liaised with police to facilitate a way through.

"To walk on the public footpath is the right of any citizen of NSW," Shoebridge said.

According to Shoebridge, police had a heavy hand with protesters, who were simply exercising their rights.

"At a number of points, police reformed the cordon and bottlenecked protesters. Pushing and shoving occurred between protesters and the cordon," he recounted.

Shoebridge said that police and riot squads dragged at least two protesters from the intersection by their limbs, with mounted officers forcing people back to the footpath, which he was able to capture on video using a mobile phone.

"I saw two people physically dragged away and arrested. After that fracas the police did what they should have in the first place and stopped traffic so that the protesters could cross the street," he said.

Shoebridge added that if the police had worked with the protesters and stopped traffic to cross an intersection, there would have been no public disturbances.

Loewenstein and Serkowski both maintain that the scuffles have not tarnished the message of support.

"I don't know who the fault lies with here but generally you always get a few people who do, you know, make a bit of trouble. But the issue of Wikileaks transcends left and right divides," said Serkowski.

Organisers are planning an even bigger group action on 15 January 2011. And public events before that time will depend on the results of Assange's legal battle in London.

Political activist group GetUp! today took out a full page advertisement in The Australian urging Prime Minister Gillard to stand up for the rights of Julian Assange and to support Wikileaks' actions.

GetUp! is set to publish a similar open letter in The Washington Times and The New York Times to US President Barack Obama and US Attorney General Eric Holder to do the same.

GetUp! told ZDNet Australia in a statement that it chose The Washington Times after it called for "the death of Julian Assange" and selected The New York Times due to the prestige of the masthead itself.

The US advertisements are slated for print in tomorrow's editions.

GetUp! was unsure of the cost of the advertisements, saying that the deals were worked out between the publication using ad buyers.

Wikileaks has polarised the world. Have your say in our global ZDNet poll!