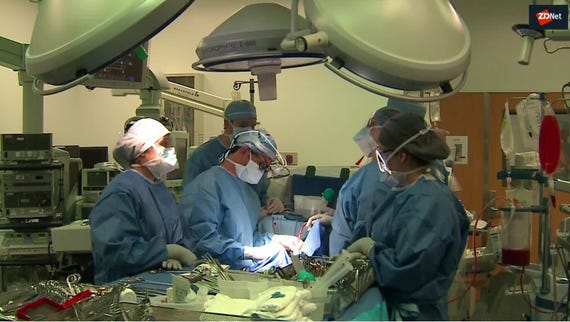 An Australian-made 3D-printed sternum and rib cage has successfully been implanted into a 20-year-old New York patient who had been diagnosed with a rare bone cancer, the Commonwealth Scientific and Industrial Research Organisation (CSIRO) announced on Thursday.

The 3D-printed titanium and polymer sternum and rib cage was produced by the CSIRO in partnership with Melbourne-based medical device company Anatomics.

The patient, Penelope Heller, had to have her sternum removed after being diagnosed with chondrosarcoma in 2014. While the cancer was successfully removed, Heller's replacement sternum and rib cage that was developed using off-the-shelf solutions made post-operation life painful.

In August this year, she underwent additional surgery to replace her implant with a customised sternum and partial rib cage made from 3D-printed titanium and combined with Anatomics' PoreStar technology, which is a porous polyethylene material providing "bone-like" architecture to facilitate tissue integration, the CSIRO said.

"3D printing allows for advanced personalisation of implants so they uniquely fit their recipients, as well as rapid manufacture, which could mean the difference between life and death for a patient waiting for surgery," the Australian government-backed organisation added.

The organisation claims it is the first time this technology has been used in the United States.

The CSIRO and Anatomics had previously partnered to produce sternum and rib cage prosthetics for a 54-year-old sarcoma patient in Spain in 2015. The CSIRO said at the time the patient's surgical team knew the surgery would be difficult due to the complicated geometries involved in the chest cavity, and decided the customisable 3D-printed sternum and rib cage was the best option.

Once the prosthetics were made, it was sent to Spain and implanted into the patient. 12 days after the surgery, the patient was discharged and recovered well, the CSIRO then said.

That operation followed on from the production of a 3D-printed titanium heel bone that prevented an Australian cancer patient from having his leg amputated in 2014.

A 61-year-old British man received 3D-printed titanium and polymer sternum in 2016 after his sternum was removed due to a rare infection. The CSIRO said it was the first time a titanium sternum combined with a synthetic polymer has been used to replace bone, cartilage, and tissue in a patient.

Oventus had been developing O2Vent for almost three years prior to the opening of its 3D printing facility, and an initial prototype of the O2Vent, which completed successful clinical trials, was 3D-printed at CSIRO's Lab22 facility.