SAN FRANCISCO---When it comes to wooing developers, Amazon Web Services typically talks up and trots out everything from new SDKs to security layers.

But for attracting more customers, Amazon usually leans on its base of famous customers and global presence as the key selling points.

At this year's annual customer summit in San Francisco, the Seattle-headquartered corporation tried a mixture of both.

"Cloud has become the new normal," remarked AWS chief Andy Jassy during the opening keynote, predicting the "vast majority of workloads" will move to the cloud within the next 10 years.

Time, Inc., for example as outlined by the publishing giant's CTO Colin Bodell, is using AWS to eliminate two of its data centers within the next year.

"It's been a big cultural transformation as well," Bodell said, explaining the more Time, Inc. does on AWS "changes not only how we use technology" but also provides for different and more agile development environments. 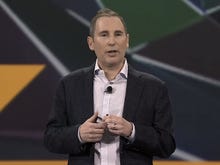 Jassy traced deployments from new companies building businesses from scratch on the cloud to established corporations moving as fast as they can, migrating existing apps to the cloud.

Jassy highlighted AWS is serving everyone from tech favorites such as Etsy and Netflix to buzzy startups like next-generation video platform Vessel, which was championed as a case study on stage with CEO Jason Kilar of Hulu fame.

But AWS is most keen on growing its enterprise customer base, as demonstrated by a bit of news dropped just ahead of the opening keynote session, boasting a collective of enterprise software vendors (MicroStrategy, Software AG, Tibco and Onshape) tapping AWS to power their services.

They join Infor, Informatica and Splunk, among other software vendors, already using AWS. Outside of the tech world, Jassy dropped even more well-known names among the AWS customer base, such as Nike and Major League Baseball (MLB).

Nevertheless, even with a more sales-minded crowd, technical details do matter.

For example, Jassy unveiled the new Amazon Elastic File System, a fully-managed and SSD-based system on EC2 for scaling shared file storage. Available in preview this summer, pricing is based on storage consumed.

"It effectively means you only pay for what you use," Jassy clarified, suggesting the service can be used from simple dev testing to managing data-intensive apps.

That was followed by the debut of the Amazon Machine Learning Service, a fully-managed product aimed toward developers even with no experience in the subject matter.

Trying for a more point-and-click entry point, the S3-based product has been designed for creating machine learning models, visualizing those models through tools built into the AWS Management Console, and then finally deployment within seconds. The Machine Learning Service has already been tested on Amazon.com.

"It's literally a drag-and-drop operation," described Matt Wood, who leads scientific and technical computing at AWS.

Also priced on a pay-as-you-go basis, the Machine Learning Service is available out of the AWS US East (Northern Virginia) region now.

Mixing up traditional pricing models became the big theme by the end of Thursday's announcements, most evidently through the debut of the AWS Marketplace for Desktop Apps, a new digital storefront stocked with popular apps from Adobe to Microsoft.

The big difference here reflecting the "new normal" as repeatedly noted by Jassy, users will pay by the month instead of a traditional multi-year licensing model.

Jassy also introduced the new Workspaces Application Manager (WAM), intended to simplify packaging those apps, raise visibility about the apps and licenses, and enable users to do patches at scale.

AWS has already trotted a handful of updates and new features over the last few months, in all likelihood garnering the most eyeballs with WorkMail, a corporate email service that could take on Google Apps and Microsoft Office 365.

Stemming from the bevy of portfolio additions unveiled at re:Invent, AWS also followed up on some of the promised goods in March, including larger and faster Amazon Elastic Block Store (EBS) volumes.

AWS is also pushing out event-driven compute service Lambda into general availability with more functionality for mobile developers around Amazon's identity and sync service. A Java-flavored version is promised to follow within a few weeks.

"It's not just the number of services, but how many features you have within those services," Jassy stressed in what matters most to building out the cloud infrastructure.

Jassy followed up by insisting AWS has more features than any other cloud technology provider.

Nevertheless, AWS has a long year ahead of itself if it plans to outpace the tally of 516 new features and services rolled out in 2014 alone.

Incidentally, that hard work starts at home with some tasks that might be considered mundane at this point as demonstrated by the livestream (or lack thereof) during Jassy's keynote, prompting many followers online to question the strength of AWS -- even in jest given the first guest's role at a digital video platform provider.

UPDATE: An Amazon spokesperson responded to ZDNet with the following statement: