Jassy positioned that AWS is the fastest growing IT company in the world and touted customer wins and ecosystem growth. Jassy called out systems integrators and 1,900 products on AWS' marketplace. "This area of our business has grown dramatically," said Jassy.

The themes from Jassy emerged at AWS' re:Invent 2014 conference.

Overall, AWS is positioning itself as the new normal for infrastructure with a platform that can do everything from analytics, to app services to management to mobile services, administration and security as well as the core compute, storage, networking and databases.

With Jassy's talk it became clear that AWS sees itself as more than a commodity infrastructure play. Jassy talked up features that have evolved over time for compute, storage and data warehousing.

"The pace of innovation is accelerating," said Jassy, who brought up a bevy of customers including MLB Advanced Media, which builds on AWS.

The goal here is clear: Create a stack for enterprises and a nice daily annuity.

Yes, daily. For instance, Antony Setiawan, cloud systems engineer at Adobe, is using Splunk to monitor and log its AWS instances. Adobe uses AWS infrastructure for its various services including the Creative Cloud. Setiawan oversees about 3.5 TB of data a day and aims to spend $12,000 per TB a day on AWS. Multiply that Adobe use case by hundreds of enterprise and you get the picture for AWS.

The customer parade and innovation

Jassy said that AWS customers aren't about the cost savings---a strategic turn of sorts given the price wars in the cloud---but sign on for agility and innovation. "You can go from idea to launch in record time," said Jassy. "If you have an idea you know you have a chance to make it work."

A parade of customers were brought on stage to emphasize the point.

MLB Advanced Media CTO Joe Inzerillo highlighted Statcast, which uses AWS to compile stats and add analytics to games on the fly. The architecture on AWS is designed to handle bursts as well as deliver analytics. Inzerillo noted that providing insights to fans with Statcast wouldn't have been possible without cloud architecture.

Jeroen Tas, head of healthcare information solutions and services at Philips, highlighted how the cloud could be to analyze risk factors and help patients manage care better. "We're allowing the data to be shared to improve care," said Tas. "A digital scan is 500GB then there's all the data streaming in."

Tas said healthcare is becoming more about digital and petabytes of data and analysis. Without a cloud architecture, healthcare couldn't go digital. Tas touted the Philips HealthSuite, a platform that aims to take data and provide decision support for doctors as well as patients. "We're talking about adding a petabye a month," said Tas.

Jassy naturally talked disruption about smaller companies and how they can upend large ones. "Large enterprises have to move fast to be competitive," said Jassy. "The new normal is companies of all sizes deploying to the cloud by default." said Jassy.

Jassy also previewed a series of new services that are aimed at solving enterprise problems. The services also highlight how AWS is moving beyond commodity infrastructure.

AWS launched a new relational database called Aurora that aims to provide proprietary performance at the cost of open source.

The AWS database will be MySQL compatible but with 5 times the performance with a 10th of the cost, said Jassy. AWS has been working on Aurora for three years.

Among the performance gains:

Those features are going to start at 29 cents per hour. AWS said the preview starts today.

Among other services either in available, preview or landing 2015:

The latter three services are all designed to alleviate security concerns about the cloud and move more workloads to AWS. Compliance requirements are the biggest hurdle for cloud providers. 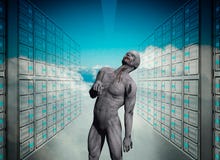 2014: The year the cloud killed the datacenter This year more and more CxOs pulled the life support on their own datacenter infrastructure in favor of ever-maturing public and private cloud offerings.

Jassy said that enterprises are moving dev and test to the cloud in a no-brainer move, but large enterprises are increasingly moving entirely new apps to AWS. "That first wave is dev and test and new workloads," said Jassy. "The second wave is Web sites and digital transformation." Analytics projects are also a key cloud use case and now business critical apps are starting to move.

In the future, Jassy is predicting entire data centers will move to the cloud---specifically AWS. The master plan for AWS is clear: Capture data center migrations, add enough features to compile a stack and convince enterprises to move everything to the cloud. "All-in migrations are becoming part of the new normal," said Jassy.

Indeed, Intuit said it will move to an all-in arrangement with AWS.

Jassy was also sure to note that enterprises don't have to go all-in with AWS. Jassy outlined a series of features for hybrid cloud deployments for a good reason. Microsoft Azure has a strong hybrid story.

To put an endcap on AWS' hybrid story, Dan Zelem, CTO of Johnson & Johnson outlined how the decentralized healthcare giant is using AWS. In the end, J&J couldn't go all-in with the cloud if it wanted to. Zelem has a huge on-premise IT operation, but plans to go hybrid. But in Zelem's hybrid model, AWS appears to be capturing more workloads as J&J aims to triple the 120 applications it has on AWS now and go cloud first with analytics. "It's not going to be clear where the data center begins and ends," he said.

Following the keynote, Jassy held a question and answer session with the press. Here are some of the followups.

Why MySQL compatibility for Aurora? Jassy said the MySQL compatibility is due to the reality that many enterprises are using it. "We wanted something that made it easy to move existing workloads to, but didn't want them to be locked in. We tried to pick something broadly used and then did a lot invention on top of that," said Jassy. "The concept is that performance and durability of proprietary databases at open source prices." He added that Aurora will remain compatible with MySQL.

Investment in cloud functionality given Amazon's lack of profitability relative to Google and Microsoft. Jassy said that AWS will be the largest business to Amazon long term. "We're confident we can fund AWS in the way that it deserves," said Jassy.

Standardization of cloud migrations. Jassy said it's important that enterprises develop standards as groups within a company move to AWS. The CTO and CIO are driving the AWS migrations and spend. He added that the new services that were launched at re:Invent were directly influenced by central IT concerns.

Enterprise migration. Companies increasingly need help to migrate to AWS, said Jassy. Systems integrators and the AWS ecosystem is a key asset in those equations. "That (integrator) work is really accelerating for our ecosystem," said Jassy. Shifting to the cloud is becoming a cultural and change management issue in many enterprises. "Companies that move to the cloud don't tolerate being blocked. They pick a bunch of workloads to get experience," said Jassy. "That is what accelerates the process." Another wrinkle: Legacy applications on old infrastructure may not be able to be moved to the cloud without a lot of risk.

Competition. Jassy said there will be a small handful of cloud providers because scale matters. When Amazon cooked up the AWS business plan in 2003, the theory was that there would be multiple providers because of the cloud value proposition. Jassy made a distinction between infrastructure cloud services and software as a service, He added that AWS is making it easier for SaaS vendors to run on top of its platform.

Join Discussion for: AWS: With more than 1 million active customers,...