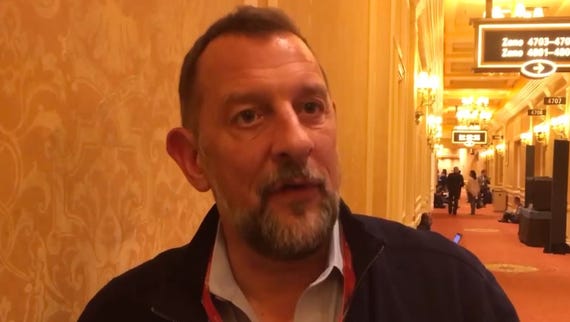 https://hub.zdnet.com/core/object/lookup/common/content_video/9f2ce58b-18f8-47c4-a3b5-9930a4d39972AWS has announced the launch of Amazon Elastic Container Service for Kubernetes (EKS), a fully-managed service that allows Kubernetes to be used on AWS.

Kicking off the first official day of AWS re:Invent in Las Vegas on Wednesday, AWS CEO Andy Jassy explained that Amazon EKS runs the upstream version of the open-source Kubernetes software, allowing for the use of existing plugins and tooling from the Kubernetes community.

"Hundreds of millions" of containers are being launched on AWS from the likes of CapitalOne and McDonald's, but over the last 12 months, Jassy said customers have become increasingly interested in Kubernetes. 63 percent of the Kubernetes that is running in the cloud is in AWS, but Jassy said for those wanting to go down this path, there's work to be done, one of the main reasons for launching EKS.

Also: AWS not buying into the blockchain hype

He said users were already running Kubernetes on top of AWS; however they now have the direct support of the cloud giant to do so.

"This makes running Kubernetes as a managed service on top of AWS much, much easier," the CEO said. "At AWS, we saw this as an opportunity to remove some undifferentiated heavy lifting. We want to let you take full advantage of the speed, agility, and immutability that containers offer so you can focus on building your applications rather than managing your infrastructure."

Jassy said EKS is integrated with a lot of key AWS features, and said the company is working "really hard" on making more available.

Also: Amazon to put machine learning into the hands of more users

Jassy also lifted the lid on AWS Fargate, which allows users to run containers without managing servers or clusters.

AWS Fargate is in essence like EC2, but instead of a virtual machine, it's a container.

"It's a technology that allows you to use containers as a fundamental compute primitive without having to manage the underlying instances," AWS explained. "All you need to do is build your container image, specify the CPU and memory requirements, define your networking and IAM policies, and launch."

Want to use Kubernetes, but worried about portability across clouds, containers, and vendors? Don't be. The Cloud Native Computing Foundation has you covered.

After providing VMware customers with bare metal access, AWS has extended the offering to its own customers in public preview.

Amazon Web Services (AWS) is reportedly building a Kubernetes service, which is bigger than just containers.

This comprehensive guide about AWS covers the expansive cloud services offered by Amazon, common use cases and technical limitations, and what to know when adopting this technology.