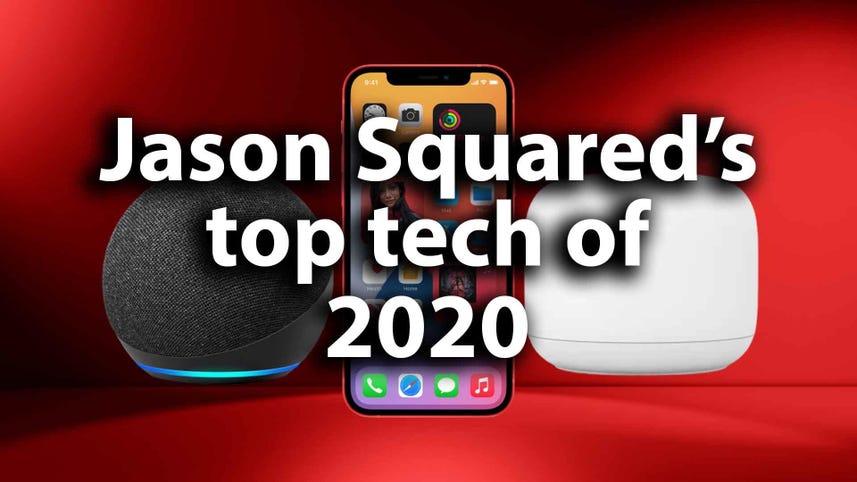 It's nearly the end of the year, which means it's time to take a step back and reflect on 2020.

Despite how much this year was an Annus Horribilis on so many levels, some very good technology products were released. While we cannot list them all, here's what made the top of our list on Jason Squared at ZDNet.

It should come as no surprise that Apple utterly dominated the year's list of best technology products. Apple brought its A-Game this year, and it is starting to look like an unbeatable force when you compare their product lineup to its competitors.

Part of this is attributable to the fact that the company has so much cash and so much money devoted to research and development, that it's one of the few who have been able to make it through the pandemic without introducing compromises into products it's releasing. Let's face it; its customers would not accept anything less.

Just about the only thing the company has allowed to slip is delays in shipping and manufacturing. Apple has spread its products over multiple launches and ordering windows, but it's handling it well. If it's consciously left features out of products because of the pandemic situation, it's done an excellent job of concealing it. There were a few things it could have done, like migrate to USB-C on iPhone and potentially get TouchID back as an authentication mechanism on the iPhone as well. But now we are nitpicking.

Best phone in the industry is even better, faster, and has 5G

With a blazing fast Apple Silicon A14 Bionic processor, a 6.1" OLED display, dual cameras, magnetic locking charging interface, and a "retro" squared-off industrial design, the iPhone 12 maintains its crown as best smartphone. If the "default" iPhone isn't your cup of tea, the new 12 Mini should appeal to those looking for the same power, but in a smaller device. For creatives, the 12 Pro, and 12 Pro Max should fit the bill for those looking for more powerful camera capabilities as well as larger displays.

Our runner up in the Android department goes to Google, with its Pixel 5. It's not a super-performer like the iPhone 12, but it's a very respectable midrange 5G device.

Almost "Pro" for about half the price

The iPad Air is really an impressive device for the money. It is the best tablet for virtually any consumer or a business user looking for that higher-end content consumption and creation experience. It's the "Executive" iPad. It matches the iPad Pro in just about every category, processing power, and display quality -- except refresh rate, which really only design professionals need. Most people won't use that for the extra $200-$400 an iPad Pro costs.

My runner up is the refreshed base-level iPad 8th Generation, which is ideal for students and folks who want a device for casual content consumption.

For home and small office networking, we probably should hand this year's award to Google Nest WiFi in terms of ease of setup, and also performance.

However, the just-released Eero Pro 6, by Amazon, is Wi-Fi 6, rather than Google's device which uses the older 802.11ac standard. The new Eero also has Zigbee radios in it for supporting home automation devices such as smart plugs and dimmers. Since nobody has actually tested one yet, I'm going to have to give it to Nest for now. NetGear's Orbi is also Wi-Fi 6 and has probably the fastest of any Wi-Fi mesh setup that's currently out, but it's also the most expensive solution at about $700 a pair.

Best smartwatch in the industry is even better, faster, and has a pulse oximeter

Apple is crushing it in just about all the categories. Watch Series 6 is the best in that category, without a doubt. Series 4 introduced a larger display over Series 3, and an integrated ECG. Series 5 improved on that with its always-on display, and it only got better with the Apple Silicon S6 dual-core 64-bit processor, an integrated pulse oximiter and altimeter this year with Watch Series 6. If I had to choose a runner up, it's the lower-priced Watch SE. Android was a no-show this year in terms of WearOS.

If you're an Android user, Samsung and its Tizen OS is your best choice, with Gear S3.

The default choice for iOS users looking for noise cancellation

What else can we say? AirPods Pro have excellent integration with the iPhone and iPad, their sound performance is stellar, and it's noise-canceling capabilities are quite respectable for in-ear buds. Let's face it, it's the default choice that many iOS users are going to make unless they don't want noise cancellation, in which case, they'll pick up the regular Airpods, Second Generation.

However, I was really impressed with Huawei's Freebuds Pro this year, in terms of the amount of technology packed into it as well as the noise-canceling performance which exceeded even the Airpods Pro. You might have a problem finding them now in North America, though. Jason Cipriani really likes the Samsung Galaxy Buds Plus.

For $99, the Amazon Echo Generation 4's sound performance is outstanding. It has innovative new machine learning technology that will significantly improve query time and permit the introduction of some very impressive new kinds of voice processing applications when Amazon opens it up to developers. Plus, you have Zigbee and its new Sidewalk networking technology built into it, so in terms of practical kinds of innovation, Amazon is absolutely on top of its game. Alexa's also always improving; even for older products, you really can't beat Amazon in terms of what it's done with machine learning and the cloud.

Apple's new Homepod mini looks cute; the sound is probably decent for smaller drivers than what the full-size Echo 4th Gen has for the same price point. You'll need to spend $300 at Apple to get an equivalent dynamic range and volume with a smart speaker, the bigger HomePod. And well… Siri isn't that bright.

At $50, there isn't a better "stick" out there for the money

I was skeptical when I bought it, but I was pleasantly surprised. This $50 powered dongle, which you connect to your TVs' HDMI port, allows you to access all of your programming, including YouTube TV, Netflix, Amazon Prime, Hulu, CBS All Access, Disney, HBO Max, ESPN, and many others. The Android-derived Google TV user interface is speedy, and the hardware features a 1.8Ghz quad-core Amlogic S905X2 processor with an ARM Mali-G31 MP2 GPU. It's loaded with 2GB of RAM and 8GB of onboard storage, with the ability to output 4K native resolution with Dolby Digital and Dolby Atmos bitstream audio. And this year, you even get a cute little remote control with it -- no smartphone needed. My only real beef with it is it doesn't support Apple TV.

Jason Cipriani likes the new Roku Ultra. It does have Apple TV support, but it doesn't have HBO Max.

Check out our ZDNet Recommends directory or Holiday Gifts hub for some more inspiration.

Our sister sites also have the following gift guides:

Android
Is the iPad ready to replace your laptop or desktop?