Taylor Freitas is a freelance writer and has contributed to publications including LA Weekly, CNET, The Simple Dollar, and Bankrate. She holds a B.

For most people, buying a surge protector is a quick purchase that doesn't require much thought. However, doing a little extra research beforehand can pay off in the long run.

As the name would suggest, surge protectors are designed to keep your electronics safe during a power surge (such as a lightning strike). But not every surge protector is the same, and the right one for your home will depend on how many devices you own and how concerned you are with protecting them in case of a surge.

If you're in the market for a new surge protector, check out the following list to find some of the best options on the market right now. We've included something for everyone from basic, budget-friendly surge protectors to sophisticated, Wi-Fi-enabled devices. 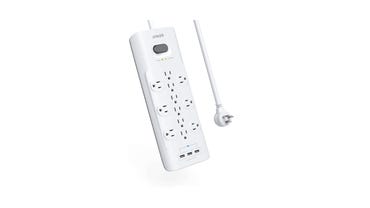 Whether you're looking for power, safety, or versatility, the Anker PowerPoint Strip 12 has it all. With three USB ports and 12 AC outlets, this product would work well for all types of purposes, including gaming system set-ups and home offices. The USB ports are designed with Anker's PowerIQ fast-charging technology, which can save up to an hour of charging time for mobile phones.

In terms of safety, the surge protector has an LED indicator that displays when surge protection is active. When overloaded, it will automatically shut off, helping protect your devices from damaging electrical surges.

As another (but smaller) perk, this surge protector has a sleek design and is available in white and black, so it should match most electronics. 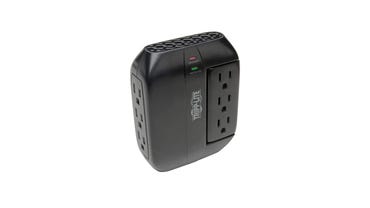 If you only have a few devices to plug in, consider the Tripp Lite SWIVEL6. This surge protector plugs directly into the wall and features three rotating outlets, so it's ideal if you only have a small amount of space behind your TV. It would also work well in hotel rooms since it's compact and easy to throw in your suitcase.

As for safety, the device includes LED lights to indicate protection status and has an automatic shut-off setting during surges. It's also been certified to meet UL 1449 standards, so you can feel confident that you're buying a safe product.

The brand is known for its diverse surge protectors ranging from one to 12 outlets, but we think the six-outlet SWIVEL6 strikes a nice balance of power and protection. 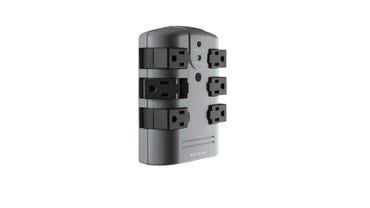 The Belkin PivotPlug 6-Outlet Surge Protector is another good option if you're short on space or want fewer cables around your home. Like the Tripp Lite product, it plugs directly into the wall and comes with pivoting outlets for all types of device cords.

This Belkin product has an energy rating of 1,080 joules, which is enough to protect an average-sized home office during a power surge. It also has easy-to-read red and green lights so you can see when surge protection is active.

There are also products in the PivotPlug line that have more outlets or come with a cord if that's what you prefer. 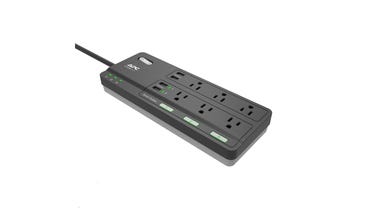 Produced by Schneider Electric, the APC SurgeArrest is a smart surge protector with built-in Wi-Fi and smart outlets/USB ports. Not only can the device power and protect your electronics, but it also works with Amazon Alexa, so you can control your devices with just your voice. Plus, the APC app lets you turn your devices on and off -- no matter where you are.

APC SurgeArrest provides 2,160 joules of surge protection to keep your electronics safe during a surge. All outlets are UL certified for additional safety, and the device includes a two-year warranty.

At $40, this smart surge protector is slightly more expensive than the others on this list. However, if you have a smart home or want to control your electronics remotely, then the higher price tag might be worth it.

Budget-friendly option with a surplus of outlets 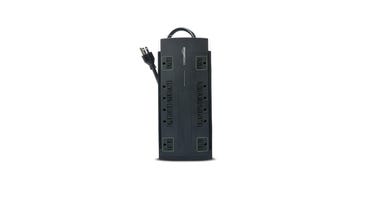 If you're looking for a cost-effective, no-frills surge protector, look no further than this one from Amazon Basics. It's a fairly straightforward device, with 12 outlets (but no USB ports) and your choice of an 8' or 10' cord.

The Amazon Basics Surge Protector is a decent deal -- especially if you're someone who needs quite a few outlets on a single surge protector. 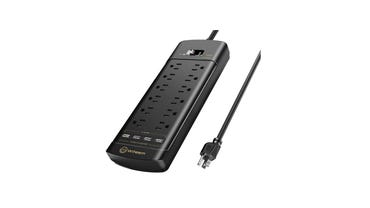 This surge protector from Witeem is another high-powered option with 12 outlets and four USB ports. Even better? The USB ports are equipped with fast-charging technology, so you can quickly power up your favorite devices.

With an ample 4,360-joule surge rating, this product could be a good pick if you have a large gaming set-up, entertainment system, or shared home office. In addition to surge protection, the Witeem device also protects against overheating and short-circuiting.

The Witeem Surge Protector Power Strip comes with a 6' cord and is available in black or white.

With so many surge protectors on the market, we wanted to make sure that we chose some of the best options. We did this by reviewing several criteria, including surge rating, number of outlets and USB ports, and warranties.

At the same time, we wanted to include options for every budget and style, so you'll notice that the surge protectors we chose come in a range of prices and designs.

Finally, we also considered customer reviews. Each of the surge protectors on this list received at least a four-star review on Amazon, so you'll know that you're in good company if you choose one of these products.

Which is the right one for you?

When evaluating surge protectors, there are a few main things to think about. First, how many and which type of devices will you be plugging into your surge protector? If you're only using it for your TV or laptop, you should be fine with a lower surge rating (between 1,000 and 2,000). In that case, we'd suggest something straightforward, like the Tripp Lite or Belkin products.

But if you're a serious gamer or just want to run multiple devices on the same surge protector, you should go for something with a higher rating. The same applies if you have expensive electronics that you want to protect (in which case, you should also seek out a surge protector with a connected device warranty). If this is you, we'd recommend something like the Anker PowerPort Strip 12.

You'll also want to consider which extra features you might want. For example, some surge protectors include fast-charging USB ports so you can charge your phone or tablet. Others include built-in Wi-Fi, apps, or smart home integration, so you can control your electronics with your voice or mobile phone. The APC SurgeArrest Smart Surge Protector is a good option in these cases.

What is a surge protector?

Surge protectors are electrical devices that plug into a power outlet in your home. They also provide power for one or multiple devices (such as TVs, gaming consoles, and laptop chargers). Most importantly, however, surge protectors keep your devices safe during a power surge. Surges happen for a number of reasons, like when a large appliance in your home kicks back energy or when lightning strikes.

Is a surge protector the same as a power strip?

Power strips simply allow you to plug multiple devices into the same outlet. Unlike surge protectors, they do not necessarily prevent damage from occurring to your devices when they're plugged in.

Surge protectors are usually bigger and bulkier than power strips.

Do I really need a surge protector?

Surge protectors are not essential, but they're a good investment. They can extend the lifespan of your electronics by keeping them protected during power surges (which happen more often than you'd think). They're also relatively cheap, so buying one is an affordable way to get extra peace of mind.

Are there alternatives worth considering?

It's better to have more outlets than you need, rather than not having enough -- which is why we focused on surge protectors with at least six outlets or USB ports. However, there are also plenty of great options if you're looking for something smaller. Here are three picks.