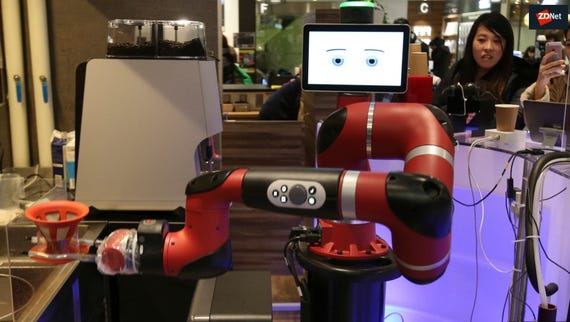 Boston-based Rethink Robotics, which makes the personable Sawyer, is expanding and just announced ten new distribution partners in the U.S., Europe, and Asia.

Also: Robots with soft hands will transform the world. Here's why.

Collaborative robots differ from the huge industrial robots used by automakers in that they're smaller, task-agnostic, and easy to program on the fly. Features like force sensors and machine vision enable them to operate outside cages and alongside humans.

Many of these robots actually act as a second pair of dexterous hands to augment the capabilities of skilled workers.

The market for collaborative robots is surging and could be worth $4.3 billion by 2023, with a CAGR of 57 percent.

With its new e-series line, Universal Robots is dialing in some of the features that have helped spur growth in the cobot market, like new force/torque sensors that aid applications that require precise force control, such as sanding and polishing.

With no sign of a slow down in the cobot market, both companies are expanding aggressively in new markets like Southeast Asia.

Join Discussion for: Big announcements from major players in collaborative...