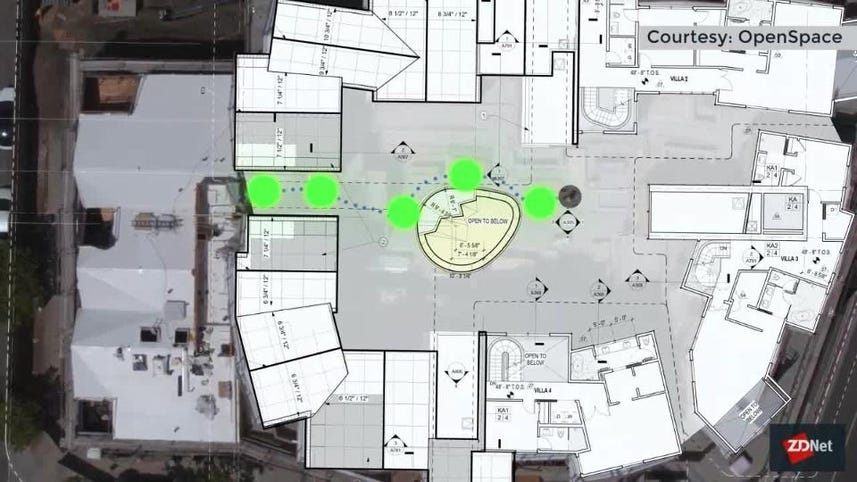 OpenSpace, a company that utilizes helmet-mounted cameras and some fancy stitching software to create "Street View"-like scenes of jobs in progress, has just landed $14 million in Series A funding. The company's tech is deployed globally in construction projects worth more than $50 billion.

I covered OpenSpace last year when the company emerged from stealth.

"Office workers have had the ability to create, edit, share, and revisit their work for a long time, but that has never truly existed in the construction industry," Jeevan Kalanithi, co-founder of OpenSpace, told ZDNet at the time. "That's because creating, storing, searching, localizing, and indexing visual data from the real world has never really been possible until now."

OpenSpace uses artificial intelligence to automatically create navigable, 360 degree photo representations of any physical space. Affixed to builders' hardhats, cameras passively capture imagery in the background as workers walk the site. OpenSpace's algorithms map the photos to project plans and stitch them together. The navigable space, which contains layers of data across the life of a project, becomes a kind of time machine, allowing users to navigate a site at any previous stage of construction. That's useful for client tours, for example, but also to measure progress and spot potential delays, overruns, and inefficiencies before they become problems.

"OpenSpace's imaging and AI analytics platform is seeing rapid adoption by some of the largest infrastructure and real estate development firms, who are also investing in the company," said Bilal Zuberi, Partner at Lux Capital, which participated in the recent round. "We are excited to continue to partner with OpenSpace in building a great infrastructure analytics company."

Artificial Intelligence and imaging have been particular areas of growth in construction, with companies like OpenSpace and Doxel, which uses drone-mounted 3D vision and artificial intelligence to measure productivity on job sites, promising builders a competitive edge with smart visualization data.

In general, the industry is undergoing a major tech renovation, with technologies like robotics, 3D printing, and drones all showing up on construction sites in the last few years.

Using AI to help write code? The tech just isn't there yet, says a company that tried

Using AI to help write code? The tech just isn't there yet, says a company that tried