The introduction of Blackberry 10 is crucial to RIM's ability to compete with Android and iOS devices as well as woo back enterprise customers.

What's so important about BlackBerry 10?

RIM has lost ground to Android devices and Apple's all-conquering iPhone on the consumer side, and as IT departments are no longer making the call about which smartphones make it into the enterprise (thanks to the rise of bring your own device) RIM has seen its vice-like grip on the business market greatly loosened, too. BlackBerry 10 is RIM's chance to prove it is still relevant.

BlackBerry 10 is RIM's newest operating system, and unlike previous generations of BlackBerry OS it is based on a Unix-like platform called QNX . It features an all-new UI and home screen with live tiles more akin to Windows Phone 8 than BlackBerry 7. 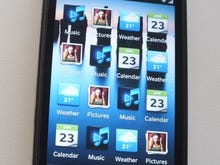 RIM's new UI is based around concepts it calls Hub, Peek and Flow.

Hub is a persistent all-in-one inbox, and rather than being an app, it works at OS level, meaning it's always accessible, whatever you are doing.

"Peek" is how you access this inbox without navigating away from the main app you are using. As well as peeking at emails and messages, you can also take a quick look at social-networking updates from sites such as Twitter and Facebook, and RIM will be making the notifications bar API available to developers.

Flow is the name RIM has given to the one-handed swipe access it has given to various features in the OS, including the Hub.

But isn't the selection of apps a bit limited on BlackBerry phones?

In recent history that's been the case, but realising the importance of an active ecosystem and how far it had fallen behind rivals like Google and Apple's app stores, RIM has been actively trying to entice developers to start building for the platform ahead of launch, as well as making their existing apps available on the new platform.

Around 70,000 apps available on the BlackBerry app store at launch, and if BlackBerry 10 does well, more will follow.

To this end, RIM holds BlackBerry Jam developer events around the world; more recently it has staged several "port-a-thons" to maximise the number of apps in the store when the devices launch. This seems to have had the desired effect, with thousands of new apps approved for submission after each event.

RIM also makes it easy for lots of Android apps to be made compatible with BlackBerry 10 using its "app player" — essentially a small software "container" in which developers can place their apps to make it work on the platform.

Thorsten Heins, the chief executive of RIM, has said that there will be around 70,000 apps available on the BlackBerry app store at launch, and if BlackBerry 10 does well, more will follow as developers get on board.

What about the handsets: Touchscreens or keyboards?

RIM looks set to release a touchscreen and a phone with a hardware keyboard, the Z10 and the X10, respectively, according to leaks.

Last year, RIM said its first handsets would likely be all touchscreen, but to allay loyal BlackBerry customers' fears, Heins said it will be introducing models with its trademark QWERTY keyboards.

"We never stated that we wouldn't build BlackBerry 10 devices with physical keyboards," he said. "We know what our strengths are. And it would be plain wrong to get rid of the physical keyboard," Heins told CNET.

However, even for RIM's handsets that don't have a physical keyboard it has paid particular attention to its on-screen counterpart. For example, it has a smart word-prediction system that learns the words you use most often, partly by scanning your messages and emails.

In addition to this, it has an invisible virtual second keyboard underneath the one on-screen. RIM has done this so it learns where on the screen you hit particular keys and adjusts over time to ensure it enters the word you intended.

Will I be able to get one on my network?

RIM will be going big on this launch, so expect the company to make the handsets as widely available as possible, as quickly as possible.

All the major operators in the US and the UK (globally, more than 100) have pledged to support the new platform, so there should be no shortage of handsets. A stock shortage at launch is not a situation RIM wants to create, considering the launch has already been twice delayed.

Will I have to relearn everything I do on my BlackBerry?

It's a different experience, but in a good way. Gone are those icons of old while there's also a lot more social-networking integration in the OS, saving you time for some oft-repeated tasks like checking your notifications.

But that's not to say it's all different: There are still the same familiar features, whether your company uses BlackBerry Enterprise Server (BES) or not, like secure email and BlackBerry Messenger (BBM).

It's different in the way that you navigate it, more than anything, thanks to the introduction of Hub, Peek, and Flow.

My company gave me my phone, what's the Balance thing?

Balance actually isn't new , but RIM's going to be making a bit more noise about it when BlackBerry 10 arrives.

BB10's a different experience, but in a good way. Gone are those icons of old while there's also a lot more social-networking integration.

Balance is short for work/life balance — it's RIM's way of allowing corporate customers to keep their documents and communications secure and separate from the personal photos, apps, and documents of the employee using the phone.

RIM's management tools will give companies complete control over this "work" section and what functions are permitted. For example, entering BlackBerry World (nee, "BlackBerry App World") in the Work mode will give a list of apps that have been approved for installation and use by your company. If, however, your friendly IT manager doesn't think that Facebook is a business essential, you can still install it in the "personal" side of your phone.

That's not to say you can't access personal apps and information from the Work section; you just can't share information between them. So, for example, if you wanted to copy some text from a work email and paste it into the Facebook application on the personal side of your phone, you wouldn't be able to.

So will RIM be doing a tablet too?

It would be hard to see RIM re-launching its handsets using a platform that's based around its tablet operating system (which is where QNX came in) and then not introduce a new tablet to use it, but it is at least possible.

To date, RIM has launched a few minor updates to what is essentially the same PlayBook tablet it introduced back in September 2010, and among the new models was a 4G LTE variant. However, the original PlayBook was poorly executed in parts and failed to appeal in a big way to business or consumer users due to some strange decisions, such as omitting a native email client at launch.

So when is all this going to happen?

BlackBerry 10 is set to launch on 30 January. Best-case scenario for RIM is that BlackBerry 10 reignites consumer and enterprise interest in the brand. Worst case, RIM sets out its strategy and the world just shrugs and carries on as normal, at which point we may see RIM set its sights on new horizons .