Full Bio
Posted in Between the Lines on January 30, 2013 | Topic: BlackBerry

New York: Research In Motion (RIM) today launched two new devices running the long-awaited BlackBerry 10 platform at events around the world, including in London, Paris, and Dubai. And to illustrate how BlackBerry 10 is an all-or-nothing bet on the future, RIM has rebranded itself BlackBerry as a company.

The Z10 comes with a 4.2-inch display with 356 pixels per inch (ppi), along with a textured backing that makes it comfortable to hold. The Q10 comes with a fully fledged mobile QWERTY keyboard from a slightly smaller portrait display. It comes with a glass-weave cover, making it thinner and lighter, but also stronger than plastic.

Both devices come with a 1.5Ghz dual-core processors with 2GB of RAM, 16GB of internal storage, and an expandable memory card slot. Also included is a micro-HDMI output port on each device and near-field communication (NFC).

And, as expected, both devices will connect to compatible 4G LTE and HSPA+ networks.

The smartphone maker said the Z10 will retail for "around $149.99 on a three-year contract."

The Q10 will be made available to worldwide carriers in April, and pricing will range between £36 and £45 per month for a two-year contract on most networks. In most cases, upfront fees should be expected.

Today, BlackBerry chief executive Thorsten Heins said, "Finally, here we are." He noted that today was not the end point of more than two years' work; it was the "starting line" for a new wave of BlackBerry products.

And then Heins dropped a surprise bomb on the audience by announcing that "Research In Motion" would become "one consistent brand that is recognized around the world." RIM will therefore become "BlackBerry," combining the name of the company and the platform together.

"One brand, one promise," Heins said.

RIM--sorry, I mean BlackBerry--has already garnered support from the three major carriers: Verizon, AT&T, and T-Mobile . In total, BlackBerry has more than 650 carriers around the world.

BlackBerry global creative director Alicia Keys--yes, the singer--also shows that the company formerly known as RIM is also targeting not just soccer moms, but also moms in the workplace, according to Heins' introduction.

She said, almost too honestly, that she left the BlackBerry platform but came back after balancing two phones between work and home. Interestingly, BlackBerry has a solution to such a problem: BlackBerry Balance, which targets bring-your-own-device (BYOD) users. The software allows users to separate work and home lives with BlackBerry Balance , by splitting secure enterprise email and work apps with personal email accounts. 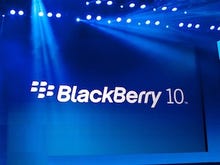 Last week, BlackBerry released the back-end mobile device management service BlackBerry Enterprise Service (BES) 10 , which powers the new BlackBerry's secure message service, along with policy management of the devices, along with both iOS and Android phones.

The launch of the new platform and devices comes at a crucial time for the Ontario, Canada-based smartphone maker.

BlackBerry has been under pressure to release the next wave of BlackBerry smartphones--its primary business focus--in a bid to reclaim a considerable quarter-on-quarter loss in mobile market share.

BlackBerry 10 was also delayed by a whole fiscal quarter following poor first-quarter sales put the company's cash-flow situation in the spotlight. The company also cut 5,000 jobs as part of a major restructuring effort to refocus the company's efforts on the BlackBerry 10 platform.

BlackBerry--which remains $RIMM on the Nasdaq--climbed by more than 4.6 percent in early morning trading, but dropped dramatically to more than 5 percent by the end of the launch event.