Full Bio
Posted in Between the Lines on January 30, 2013 | Topic: BlackBerry 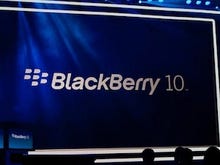 At events in major cities around the world, the BlackBerry maker rests its final chance of survival on the latest BlackBerry 10 platform, which the Canadian smartphone maker launched today.

One of the key features to the new BlackBerry 10 platform is the range of applications that are available for the two debut devices, the Z10 and the Q10, a touchscreen and hardware keyboard-enabled device, respectively.

According to BlackBerry vice president of global alliances and business development Martyn Mallick, the BlackBerry World is now "the one-stop shop for BlackBerry apps, game, music, and video."

Here are the numbers you need to know:

Join Discussion for: BlackBerry 10 launch: By the numbers