NEW YORK--BlackBerry said Tuesday that it will acquire Secusmart, a German mobile security company. The purchase highlights how BlackBerry is doubling down on the enterprise as well as mobile security. 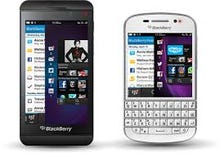 Six good reasons to still consider a BlackBerry 10 smartphone While Android and iOS are usually the first type of devices you might consider, BlackBerry continues to build some solid hardware while updating their OS to offer a compelling platform.

The two companies have been partners since 2009. The plan is for Secusmart, known recently for its anti-eavesdropping software, is to become a core component of BlackBerry's security portfolio and enterprise mobility management pitch.

BlackBerry CEO John Chen announced the deal at the company's BlackBerry Summit. Secusmart CEO Dr. Hans-Christoph Quelle said that the company's informal goal is to put its software in the hands of every chancellor and president in the world.

"There should be no need to wait to get to a secure landline," said Quelle. Quelle's point is that voice needs to be better secured. He pointed out that any call can be monitored via computer systems or eavesdropping. "It's easy to listen in and easy to create transcriptions," he said. "You need to protect voice. It's as important as PowerPoint."

The Secusmart Security Card is the centerpiece of Secusmart's technology. The smart card is a mini-computer integrated into the micro-SD card. This system contains the NXP SmartMX P5CT072 crypto-controller with a PKI coprocessor for authentication. An additional high-speed coprocessor encrypts voice and data communication using 128 bit AES. The upshot: Text messages, emails and voice communications are secure.

Secusmart has a BlackBerry partnership with integrated security as well as voice security software that runs on multiple platforms.

BlackBerry's purchase of Secusmart highlights the company's strategy to focus on the enterprise as well as security. In New York, CEO John Chen said everything the company does---enterprise mobility management, the Internet of things and in-car platforms---revolves around security.

Chen also noted that the company is focused on regulated industries such as government, finance, energy and healthcare. "Those markets equate to half of IT spending in mobile," said Chen.

As for the acquisition of Secusmart, Chen said that the two partners will integrate BlackBerry devices and security software to create security for "classified communications for the country's highest public officials."

At BlackBerry's security powwow, held in a small theater at The Museum of Arts and Design, Chen reiterated the company's strategy and how the latest BlackBerry Enterprise Server — which will manage the company's devices as well as Android,  iPhone and Windows ones — is critical to the company. BES 12 will support Windows environments in the future.

"We have a good set of customers and testimonials," said Chen, referring to the mobile management and security space. "We have huge enterprise customers who have relied on us and expect us to do more."

Doing more — to Chen and BlackBerry — revolves around security and regulated industries. With the acquisition of Secusmart, BlackBerry can boast top security and reference customers such as German Chancellor Angela Merkel.

BlackBerry wants you on BES12: Play the waiting game

Chen acknowledged that BlackBerry has had its struggles in North America, but the company's strategy is global. Chen said EMEA has been strong, as has Asia.

BlackBerry's strategy with its security message as well as trophy customers such as Merkel is to differentiate itself in a crowded market.

VMware has acquired AirWatch. IBM and Apple have forged an alliance that uses Big Blue's mobile device management tools. Citrix is a enterprise mobility management player, as is Microsoft; and there are dozens of other vendors ranging from Good to MobileIron.

BlackBerry's challenge is to convince enterprise buyers that the company can manage and secure their mobile devices, applications and messaging.

The uber-secure message assumes that security and managing risk will be the winning selling point for BlackBerry. After all, if BlackBerry can nail security for regulated industries it'll be good for all enterprises.

BlackBerry boasts customers that include all G7 governments, 16 of the G20 governments, 10 out of 10 of the largest global enterprises in the pharmaceutical, legal and automotive industries, and the five largest oil and gas companies. The big question is whether those governments and enterprises see BlackBerry as a legacy provider or innovation partner for the future.

BlackBerry's core pitch is that its security is better than what the competition can provide for enterprise mobility.

How much does security matter for enterprise buyers?

Consider the directions that various mobility players are going. BlackBerry is making security its core pitch. A panel of execs from regulated industries and BlackBerry customers talked about how BYOD doesn't fly on the security front.

Here's the problem: Other EMM players are focused on collaboration, document management and productivity. Everyone from Citrix to Microsoft highlights how mobility management is also about collaboration on the fly. BlackBerry lacks a story on the collaboration and document container fronts.

If enterprise buyers go with the argument that you can never have enough security and risk management, BlackBerry has a pitch. If companies believe security is good enough and collaboration is the win, then BlackBerry may struggle.

BlackBerry and Chen's strategy appears to cede the collaboration argument a bit. There's a reason that BlackBerry is focused on the big four regulated industries where security matters more. It remains to be seen if enterprise leaders will buy BES 12 because they want to be as secure as Germany's Angela Merkel.