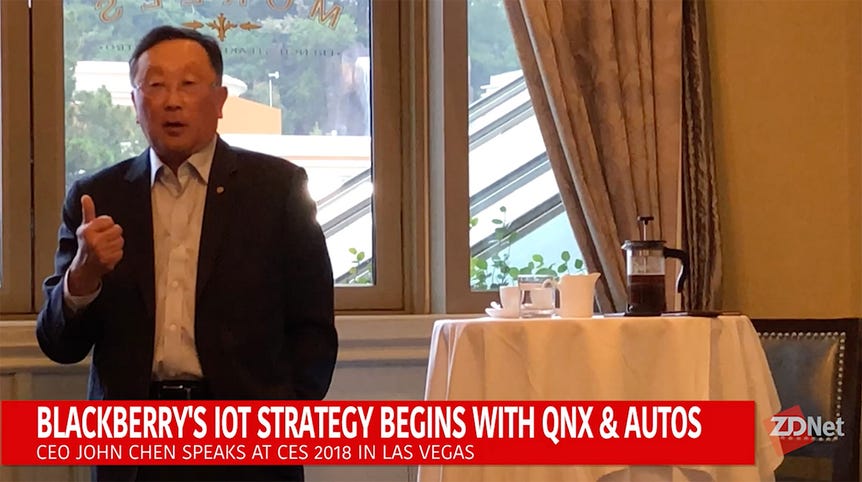 BlackBerry CEO John Chen showed up at the North American International Automotive Show (NAIAS) in Detroit on Monday to introduce the company's latest security product for the connected car space.

The platform is called Jarvis, and it functions as static binary code-scanning software that detects vulnerabilities in automotive systems and resolves them via dashboards with specific cautions and advisories.

The pitch is that smart, connected cars are usually cluttered with software components, many of which are written by third party suppliers spread across tiers. According to BlackBerry, this type of distributed supply chain setup creates a need for software that can predict and fix vulnerabilities in near real-time in order to stay ahead of potential "bad actors" and avoid failures caused by human error.

"Connected and autonomous vehicles require some of the most complex software ever developed, creating a significant challenge for automakers who must ensure the code complies with industry and manufacturer-specific standards while simultaneously battle-hardening a very large and tempting attack surface for cyber criminals," said Chen.

For OEMs, Jarvis helps to assure that software adheres to industry standards, and it can be used to scan binary files at any stage of software development. The software is offered on a pay-as- you-go usage basis and can be customized for each OEM and their entire software supply chain, said BlackBerry.

BlackBerry's interest in securing automotive and IoT has resulted in a stream of product announcements over the last year. In June, the company debuted QNX Hypervisor 2.0, a system that enables developers to partition automotive applications based on relation to safety and critical systems, ensuring that any breach in one application can be contained.

QNX is one of BlackBerry's main pillars for its software and Internet of Things strategy, especially as the company pivots from hardware to software. In recent months, BlackBerry has announced QNX and other auto partnerships with Baidu, Nvidia, Delphi, Visteon, Qualcomm, and DENSO.

"We've been able to show the industry and the market that we are delivering on what we said we were going to do, and we've been doing quite well," Chen said during his NAIAS keynote.

The Baidu partnership is the latest to highlight momentum for BlackBerry's QNX platform.

BlackBerry Radar is designed to track trailer assets in the trucking industry, and it will now be offered through more commercial truck dealers with a new partnership.