BlackBerry's COO Marty Beard was definite: "BlackBerry is not dropping the phone business, quite the contrary," he said, as the company formally launched its new handset, the Passport.

The square 4.5-inch touchscreen phone with touch-sensitive Qwerty keyboard will certainly stand out from the mass of anonymous black slabs, or the "sea of sameness" as Beard described it: it's an unashamedly boxy device described by some as powerful but cumbersome and by others as "like typing on a Pop-Tart."

BlackBerry made its name by giving executives access to email on the move and in many respects the Passport is a return to those roots: the company has touted the device as particularly good for reading spreadsheets – not exactly a top priority for most consumers. 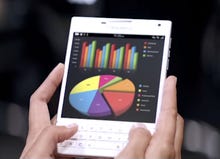 Like a muscle car, BlackBerry's Passport is strong, quirky, has a healthy dose of nostalgia and likely a limited audience. The Passport won't be a bring-your-own-device superstar, but may find a niche in regulated industries.

BlackBerry counters, however, that business users - that is, people who use their device for work for more than half of the time, accounts for 30 percent of the smartphone market.

The Passport was widely previewed so there was little unknown at the launch, apart from perhaps BlackBerry's thinking behind creating it: the big question for the Passport and for BlackBerry is how much of a market there is for business-first smartphones anymore.

Many workers use the same device for work and personal use, which has meant devices originally aimed at consumers (in particular the iPhone) have become standard business tools. As such, BlackBerry is positioning the Passport as a secondary device for many business users.

BlackBerry was once the dominant smartphone manufacturer but as the iPhone and then Android devices took off the company failed to respond quickly enough to the challenge: its last wave of BlackBerry 10 handsets were solid but failed to inspire.

According to IDC BlackBerry devices accounted for just 0.5 percent of smartphone shipments in the second quarter of this year (roughly 1.5 million handsets), down from 2.8 percent last year (around 6.7 million phones). The Canadian company has now been pushed into fourth place in the smartphone stakes behind Windows Phone. In contrast Apple sold 10 million of its new iPhones in the three days after launch.

BlackBerry still has a loyal business customer base and its handsets are still prized in government for their robust security, so a new business-focused device may keep them onside, and may prove a hit in some niches even if it's unlikely to threaten the smartphone leaders.

And the company needs to be building handsets because hardware sales remain a big chunk of the business - at least for now. In its most recent (Q1 2015) quarter, 39 percent of BlackBerry's revenue came from hardware, 54 percent from services and seven percent from software and other revenue. At the launch Beard said the devices business could make money now the cost base had been reduced.

Margins on handsets are much thinner than on software which is, longer term, where BlackBerry will want to get most of its revenue: the Passport has a role in reassuring existing and loyal enterprise customers while BlackBerry moves to a new business model based around its software for managing mobile devices.

As BlackBerry's CEO John Chen told Bloomberg earlier this year: "I don't have a plan to get rid of handsets, I have a plan to not be dependent on handsets." As such the company will still release more devices (there's a BlackBerry Classic device also due for release soon) but much of its hopes for future growth will come from software.

As such, the Passport might be eye catching (for the right and the wrong reasons), but it's actually the reception of the next version of its BlackBerry Enterprise Server that is far more critical to the company.