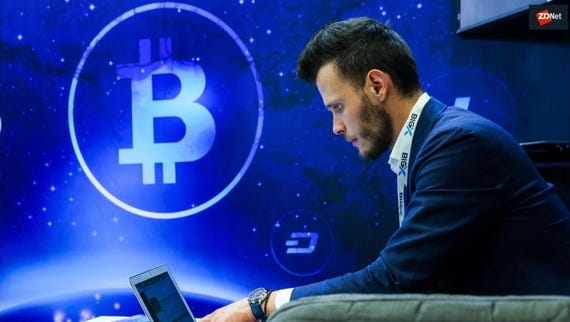 Blockchain, defined as a "single version of the truth" made possible by an immutable and secure time-stamped ledger -- copies of which are held by multiple parties -- is likely to play a role in such long-established sectors as financial services, healthcare, government, and others.

Special report: How blockchain will disrupt business (free PDF) This ebook, based on the latest ZDNet/TechRepublic special feature, looks at how blockchain is shaking up the economy and changing the way individuals and enterprises conduct business.

There is also a possible role for blockchain in a newer segment of business: the so-called sharing economy. This fast-growing business model has been defined as a peer-to-peer activity of acquiring, providing, or sharing access to goods and services. In many cases it's enabled by community-based online platforms.

Prominent examples of companies that are delivering services in the sharing economy include Airbnb, a provider of short-stay accommodations that uses a platform connecting people who have spare rooms, apartments, and homes with lodgers and tourists; and Uber, a transportation service that enables customers to access a mobile app to find nearby drivers who use their own vehicles rather than a managed fleet.

Blockchain and sharing economy -- the basics

The Blockchain Council, a group of blockchain experts and enthusiasts who support research and development of the technology, has noted that businesses such as Uber and Airbnb depend on their users to bring value to their networks.

"The problem with this model is that the revenue generated is not fairly shared with all of the members that help generate content," the council said. Blockchains, because of their decentralized nature, allow for smart contracts that can deploy software in a secure and decentralized manner, it said.

"Therefore, with Blockchain implemented software, we do not need to rely on massive data centers to run the enormous profit-making platforms," the council said. "There are already Blockchain-based platforms like Steemit that work on this principle of decentralization and reward their users more fairly."

Blockchain has had a negligible, if any, impact on the sharing economy thus far, said Rajesh Kandaswamy, research director at Gartner Inc. But that might change in the coming months and years.

"There are a variety of ways where blockchain can fit in, but this is not assured," Kandaswamy said. That includes the use of tokens in a given sharing economy ecosystem to pass value between different types of participants; and the use of blockchain-based identity systems to store data that is encrypted specifically for each participant, preventing mass hacks. Blockchain's public key infrastructure (PKI) usage can facilitate this.

"Related to the second point, we can also think of blockchain-based reputation and certification systems that are tamper-proof and that ensure data security," Kandaswamy said. "These are ideas at a high level and lot of kinks need to be worked out and proven for the technology to be viably used at scale."

Blockchain can be used as an attempt to disrupt platforms, and that is not specific to the sharing economy, Kandaswamy said. Gartner has conducted research on how blockchain undermines the value proposition of platforms.

In that report, the firm stated that decentralized blockchain technologies will "destroy the centralized platform business model. CIOs must act now to prepare for industry decentralization and plan to turn it to their advantage."

The research contradicted prevailing wisdom that platform businesses remain poised to reign successfully. "The decentralization elements of blockchain technologies are a direct assault on the key competitive advantages enabled by the centralized platform business model," the report said.

Together, blockchain, artificial intelligence (AI) and the Internet of Things (IoT) will provide any entity (person, business or thing) with an identity, intelligence, asset-based economic provenance and the ability to transact with other such entities, Gartner said.

Some companies have already begun to develop blockchain-enabled offerings for the sharing economy. For example, ShareRing is creating an ecosystem for the rental economy so that any business or individual that rents goods or services can use its platform, which is built on a blockchain.

The mobile platform allows every transaction to be secure, and users' identities can be checked and authorized before a rental agreement takes place. Rental providers receive payment instantly, without any currency conversion fees, according to the company's website.

Also: How to launch a blockchain career: 4 skills you need TechRepublic

ShareRing began its pilot phase in 2018, creating a blockchain wallet and client libraries. This year it has been refining its renter and merchant apps and expanded coverage to various countries including the U.S.

What does the continued growth of blockchain in various sectors mean for the sharing economy?

"We will need more specific proof and till that time need to be cautious," Kandaswamy said. "While blockchain technology offers certain new capabilities and that can be interesting to startups that attempt [to be] disruptive, it is also possible that some of the leading sharing economy platforms decide to co-opt blockchain, preserving status-quo."

It's too early to tell what types of sharing economy businesses will be most affected by blockchain, Kandaswamy said. Services-based businesses are more likely to feel an impact compared with asset-based companies, he said.

The effects of blockchain disruption will not likely be seen in popular sharing services for another two to seven years, Kandaswamy said.

As the sharing economy continues to grow, that could present new opportunities to leverage blockchain. Statista, a provider of market and consumer data, said there were 44.8 million adults using sharing economy services in the U.S. in 2016, and forecast that this will increase to 86.5 million by 2021.

Join Discussion for: Blockchain and the sharing economy