After a quarter century of robotics R&D, the most YouTubed robotics company in the world is going to market
Written by Greg Nichols, Contributing Writer on May 15, 2018 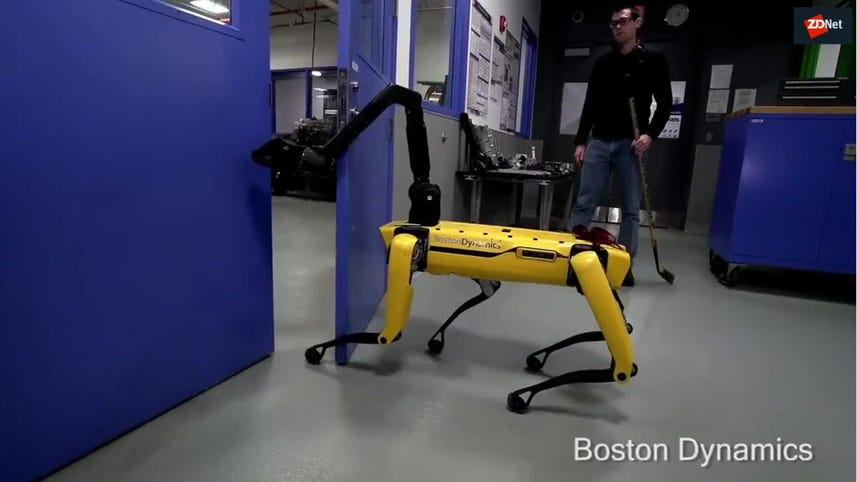 After 25 years of cutting edge robotics research and development (and millions of YouTube views), Boston Dynamics plans to bring one of its eerily lifelike creations to market.

Beginning in 2019, a limited number of customers will be able to purchase SpotMini, a dog-like robot that stands just under three feet tall and weighs 66 pounds.

Like many of Boston Dynamics' machines, the autonomous quadruped became a viral sensation when video emerged earlier this year of a prototype unit opening a door while fending off an assault from a hockey stick-wielding researcher.

Videos of robots like Atlas and Big Dog, which display extraordinary agility, balance, and dexterity, have similarly gone viral thanks to president Marc Raibert's flair for publicity and the robots' mesmerizing capabilities.

Raibert spun the company off from MIT in 1992. For most of its history, Boston Dynamics survived on research contracts and defense grants, most notably from DARPA. Google X acquired Raibert's company in late 2013 for an undisclosed sum. Then parent company Alphabet sold it to Japan's SoftBank last year.

Read also: This small robot lures hackers away from other robots

Though the company's hardware has garnered lots of attention, the bigger research and development breakthroughs have come in the form of proprietary control systems that effectively simulate animal motion. In 2008, many viewers professed feeling empathy for Big Dog after watching video of a researcher kicking the machine.

No price has been set for SpotMini, which is a smaller version of Boston Dynamics' Spot robot. As a platform that can autonomously traverse many types of terrain, it could conceivably be used for inspection or sentry duties.

At TechCrunch, Raibert announced his company would produce an initial run of about 100 units for sale next year, with production to ramp up going forward.

11 bio-inspired robots that walk, wiggle, and soar like the real things