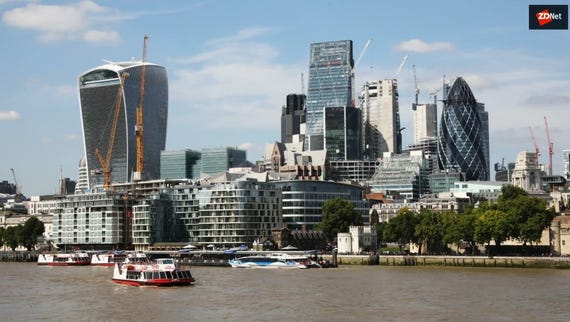 As the government outlines its plans for a Brexit trade agreement with the European Union, tech companies are worried that they may be left out in the cold by the deal.

Prime Minister Theresa May is championing her vision of how Brexit will look. Under this, the UK will generally follow EU rules and regulations concerning goods, although the UK wants to reserve the right not to go along with European rules for all goods.

For services, the UK government hopes to have more flexibility to set its own rules -- even though, importantly, it acknowledges that this will mean the UK won't have as much access to European markets as it does now.

But tech industry body techUK has already warned that if the final Brexit deal sees the UK effectively outside of the Single Market for services, this would put the UK's digital economy at a serious disadvantage compared to their European competitors.

"Given that 80 percent of tech exports are services, and our biggest market remains the EU, this will have very real consequences," said techUK CEO Julian David. "The UK tech sector does not see clear benefits of divergence with the EU. Indeed, there has been a strong consensus to maintain alignment on crucial issues such as data protection."

A deal that only covers goods and not services would risk UK-based tech firms that sell into Europe having to comply with two competing regulatory regimes and being unable to guarantee that services can be provided on the same terms to customers in different locations.

This approach also fails to account for the fact that many products have a services or digital component. An engine, for example, is no longer simply a piece of engineering: it's also an IoT device crammed with sensors, tied into maintenance contracts that generate as much revenue as the original purchase. A Brexit that fails to account for this trend could cause problems for business.

"Such a deal ignores the increasing number of goods that rely on a services contract to operate, where divergence would make it harder for UK digital-services businesses to be part of the European supply chains," said techUK's David.

"A Brexit based on goods alone is not one that plays to the strengths of the UK's digital economy. It would create a lop-sided Brexit that causes complexity for business and confusion for consumers," he added.

The Prime Minister's Chequers agreement suggests the government has decided that being closer to Europe is still key to the country's economic fortunes.

But the Chequers proposal has already cost the government two senior ministers -- Brexit Secretary David Davis and Foreign Secretary Boris Johnson -- and it's unclear what level of support there is across the rest of government. There's also no guarantee that the EU will accept this sort of cherry-picking from the UK.

But he government's current attempt to establish a bargaining position is not the tech industry's only concern.

It's still unclear what will happen in terms of freedom of movement -- a key concern for tech startups wishing to attract highly skilled developers and entrepreneurs from across Europe.

Ensuring data continues to flow through the UK is another worry. Earlier this month the cross-party Exiting the European Union Committee warned the government that it needed to move faster on getting an agreement with the EU on a legal framework for moving data between the UK and the EU: three-quarters of the UK's cross-border data flows are with EU countries, but as the UK leaves the EU, it will also leave the legal framework for data flows.

Another concern raised by tech companies concerns the broader set of trade deals. The UK is part of around 750 different international trade agreements, which will have to be amended when it leaves the European Union.

Many of these are bilateral and multi-lateral agreements entered into by the EU, from free trade agreements that open up markets, reduce tariffs and protect intellectual property, to science and technology agreements to promote international collaboration. "For every one of these agreements there are UK businesses that have benefited," said techUK in a new report.

"These are often essential vital foundations to the UK's thriving tech sector, yet currently there is little certainty to their future," warned Thomas Goldsmith, techUK's policy manager for Brexit and trade. "As the UK leaves the EU, securing existing ties with the rest of the world is absolutely essential."

It's also worth noting that the UK can't decide to roll these agreements over on its own; it will need other nations to agree to allow this to happen, both during the transitional period as the UK is leaving the EU and after. It's unrealistic to assume that other nationals will agree to this without adding new conditions, which is likely to mean the UK -- and by extention UK tech businesses -- will get a worse deal that it has right now.

However, Goldsmith said there were some potential upsides to Brexit. "One of the potential opportunities from Brexit is that the UK can regulate quicker, regulate smarter in some areas. In emerging tech, business likes regulation; in these areas it creates certainty and stability to enable them to build business models that are sustainable."

London's startups aim to avoid the mistakes of Silicon Valley

London's tech startups are booming, but their biggest challenge is just around the corner

First came the artists, then came the hackers: The strange history of London's own Silicon Valley

Why Britain has become the top tech hub in Europe (TechRepublic)