X
Part of a ZDNet Special Feature: Working from home: The future of business is remote
Home Innovation Hardware

Building a YouTube studio: Battle of the quick-release adapters

If you’re filming a lot of video, rigging your gear can be incredibly time-consuming. We’ve got a quick shoot-out that results in a recommendation for some gear that can save you time and frustration.
Written by David Gewirtz, Distinguished Lecturer on March 26, 2020 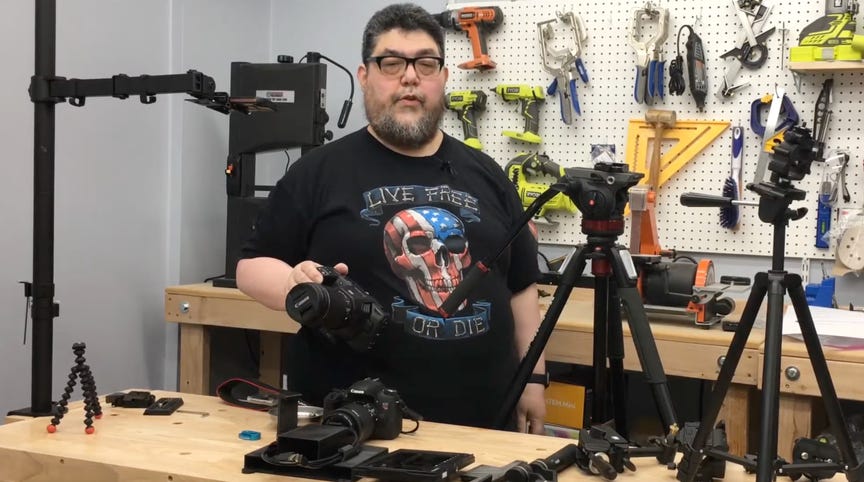 This is one of those topics where if you don't need it, you won't care, but if you do need it, you'll be rabidly interested. A quick-release adapter is a tiny gadget that allows you to snap and unsnap a camera and other filming gear without the fiddling and fussing normally involved in setting up camera equipment.

Also: Best cheap gear to turn your home office into a video studio

If you're just snapping some selfies on your iPhone, this isn't something you're going to care about. But if you're trying to produce how-to videos or doing other filming that requires a lot of setup and takedown of gear, these adapters can prove very helpful.

In my case, I often film with two or three cameras at once. One captures me talking. Another captures a close-up of what I'm working on, and sometimes a third is used for an alternate angle. For nearly every shot, I have to move tripods, switch things out, and set up the cameras. Sometimes, I have to switch cameras between shots if I need a different result.

Every single change and switch requires screwing the cameras (as well as lights, microphones, monitors, and other rigging) to tripods and mounting brackets. Often, the mountings are incompatible. I wasted a lot of time (and generated a lot of frustration) trying to find parts that fit together and then making them attach.

No, it's not the worst thing in the world. But if you're trying to crank out videos on a regular basis, eliminating something that's incredibly frustrating and wastes time can be a big win.

In the attached video, I show you how I looked at an initial set of six adapters:

Manfrotto 323 RC2: This is the one I really thought I'd wind up with because it was popular enough to have sparked a bunch of clones. I bought one original Manfrotto for $30 and an $11 Konsait Manfrotto-clone.

Arca-Swiss: Arca-Swiss is a brand, but it's also come to define a style of twist-tighten quick-release adapters. I bought two different styles, one from FocusFoto and one from Neewer. As it turns out, I standardized on the Neewer brand, but not the Arca-Swiss style adapter.

Mini quick release: I bought a set from Kondor Blue, but there are a ton of these by different brands on Amazon. Be careful, because while they look similar, many brands are not compatible with each other. In fact, the set I did standardize on, by Neewer, wasn't even compatible with themselves. I wound up having to return four of them because they didn't work with others from the exact same product listing.

Oben ORA-R2: This was a late discovery and while I eventually chose this style, I went with Neewer's version because at $16.99, it was a lot less expensive than Oben's $29.95 and was identical.

The video shows my struggles in choosing an adapter. The Manfrotto seemed perfect, but it had a stub that prevented the adapter from mounting flush, so it couldn't go on my large tripod. The Arca-Swiss was just more twisting and screwing, which was what I was trying to get away from. The Kondor Blue mini quick release seemed ideal, except it came with screws that were much too long.

Once again, watch my video to see how it all comes together. The flexibility, even in the week I've had the system up and running, has been an enormous win.

Are you using quick-release adapters? What other tricks have you come up with to optimize filming videos for YouTube or conference calls and meetings? Let us know in the comments below.

Deals
Air purifier deal: Save up to $105 on Winix air purifiers