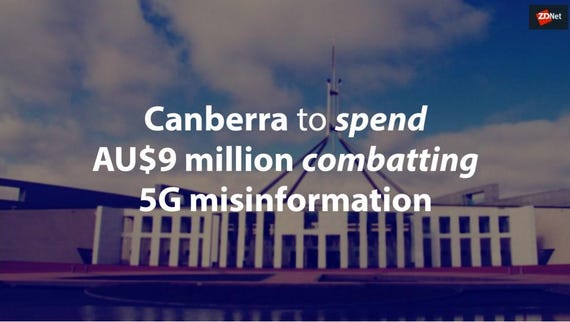 The Australian government has said it will spend AU$9 million across four years to fight misinformation about 5G and build "public confidence" in the technology.

ARPANSA has repeatedly said 5G is safe throughout 2019, including pointing to research that, through double blind trials, disproved individuals who claimed exposure to electromagnetic hypersensitivity had caused them to feel side effects, such as a burning sensation.

"We believe them … however when double blind testing was conducted with such individuals, we don't see a connection to electromagnetic field … there's been a range of double blind placebo control trials that have tested such individuals," ARPANSA lead scientist Ken Karipidis told a parliamentary committee earlier this month.

The agency has also bluntly stated that higher frequencies used in 5G do not result in a higher exposure level.

The agency stated in a submission to the committee in November that while the frequencies used in 4G and 5G mean some energy is absorbed into the body, it is too low to create any "significant heating of tissue", and the higher millimetre-wave frequencies set to be used for 5G in the future do not "penetrate past the skin".

"The power level will be low and no appreciable heating will occur in the skin," the agency said.

If exposed to energy levels 50 times higher than the Australian standard, heating of tissue can occur, such as when welding or exposed to AM radio towers, but that is why safety precautions are taken, ARPANSA said.

The submission also reiterated the scientific fact that radio waves are non-ionising, and cannot break chemical bonds that could lead to DNA damage.

"There is no established evidence that low-level exposure to radio waves causes cancer," it said.

Echoing comments from Australian telcos last month, that 5G radiation is at a level similar to many household items, such as microwaves and baby monitors, Fletcher said emissions from mobile networks and devices typically below safety limits by a factor of one hundred or more.

"The safety standards for 5G networks are consistent with those applicable to early generations of mobile technology -- even though 5G networks typically use radio signals which are lower power and over more tightly targeted areas than earlier generation networks," he said.

"The enhanced EME program will make sure all Australians have access to clear, reliable and reputable information so they can take advantage of new technologies like 5G -- and feel empowered to do so safely."

We didn't expect much right at the end of the year, but with last week's network rollout we had to give a capable 5G smartphone the top spot. Stay tuned for many more 5G-capable phones in 2020 with a shakeup of this list in January or February.

Singaporean-owned Australian telco claims the call is a world first.

The company bribed Chinese government officials for at least 17 years.

Double blind trials have debunked any health concerns about 5G and radiation, ARPANSA has said.

How 5G will bring new capabilities for connected devices (TechRepublic)

With an average of 11 connected devices in US households, consumers are ready for faster and more reliable 5G networks.