Did Apple buy the same 4.5-inch sapphire displays that Canonical had planned to use for the Ubuntu Edge?

Canonical's crowdfunded bid to launch the high-end Edge smartphone gained a lot of financial support from fans, but ultimately never came off . But in a Town Hall Hangout on Wednesday, Canonical founder Mark Shuttleworth argued that doesn't mean its ideas for the device were off the mark and indeed its vision for the future looks like it will come to pass in future devices from Apple and Samsung. 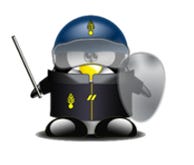 CESG, the UK government's arm that assesses operating systems and software security, has published its findings for ‘End User Device’ operating systems. The most secure of the lot? Ubuntu 12.04.

A case in point is Apple's rumoured plans to ship its next iPhone with sapphire displays , which incidentally come from the exact same supplier Canonical had been intending to use.

"Apple just snapped up three years worth of the supply of sapphire screens from the company that we had engaged to make the screens for them — the Edge," said Shuttleworth.

His comments appear to reference a recent story about Apple having acquired enough sapphire crystal production capacity through its supplier GT Advanced to make anywhere from 100 million to 200 million five-inch iPhone displays, extending its use of the hard material beyond protection for TouchID and the rear camera lens.

Since the Ubuntu Edge had a 4.5 inch display, it's given rise to speculation that Apple for some reason acquired displays for a smaller device than its current phone — which might mean it's planning to launch two new iDevice varients featuring those sapphire screens.

But does Shuttleworth know something about Apple's plans the rest of the world does not?

He didn't appear to be making that claim but was definitely arguing a point he has long insisted — that Canonical's Ubuntu Edge dream, though it didn't reach production, was far from harebrained.

Asked whether Ubuntu Edge would ever exist, Shuttleworth suggested the Edge actually did. Not in its phone, but in the roadmaps of other mobile giants.

"That was a labour of love… It was an amazing device that pulled together essentially the future in the palm of your hands. We didn't get the mandate to make it in that round, but isn't it interesting how many of the things we said we needed to include are showing up on other people's roadmaps."

Besides Apple's plan for sapphire displays, Shuttleworth noted that Apple and now Samsung were now referring to their smartphone CPUs as "desktop-class". The Edge would have come with multi-core CPU and at least 4GB RAM and a 128GB of solid state storage.

"That's another thing we said you needed to have in the Edge and that's a desktop-class CPU. And we're starting to see the roadmaps for devices from Samsung and others that have the same amount of RAM that we were proposing for the Edge. So, yes, I think devices of that calibre are going to be in the market. And for better or worse we are going to be focussed purely on making the software."

"Project Ara is all about having a little personal computer that essentially doesn't have a screen but you can attach it to a phone and then it becomes a phone. Well that would be exactly the thing you would want at the heart of a convergence strategy. So I think we're in exactly the right place doing exactly the right stuff — we’re building the software for a future convergent world."