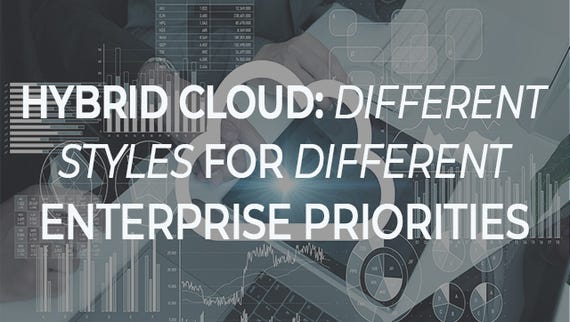 Cisco's AppDynamics outlined a vision to create what it calls a Central Nervous System of IT. It's designed to automate applications, infrastructure, and network as well as integrate artificial intelligence with "AIOps." The first volley of this multi-year effort is AppDynamics' Cognition Engine.

The Cognition Engine can trigger automated remediation such as opening tickets and sending messages to spurring third-party systems into action.

ZDNet Special Features: Art of the hybrid cloud | A guide to data center automation (PDF) | How 'cloud-native' applications are transforming IT, and why it took so long | What is cloud computing? Everything you need to know about the cloud, explained

Here are a few screenshots of the Cognition Engine via AppDynamics.

AppDynamics was acquired by Cisco two years ago for $3.7 billion. The purchase gave Cisco's software efforts a boost as well as a way to capture analytics spending. AppDynamics melded analytics and monitoring since its software could monitor metrics flowing through applications.  The next phase of AppDynamics has to revolve around automation and machine learning because enterprises have so many moving parts.

AppDynamics is now 10 years old. We started on application performance monitoring and the depth of the visibility we provide. In the 2 years since the acquisition, we've added support for Kubernetes, Couchbase, Pivotal, network visibility and IoT. While we were focused a lot of our enterprise customers continued to remind us that they have a legacy investment and infrastructure to support.

The Central Nervous System for IT is a vision that reflects the integration of multiple clouds, the Internet of Things, services, APIs, and agile development. Toss in the AIOps nomenclature and the vision reflects how artificial intelligence and agile development (DevOps and increasingly DevSecOps) will meld, too.

The core pitch from Cisco and AppDynamics is that visibility and the central nervous system model can provide visibility, insights, and automation.

Cisco and AppDynamics plan to make the Central Nervous System for IT an open platform that will work with third-party systems to absorb data, analyze it, and continually optimize.

Wadhwani, also outlined a few more pillars for the Central Nervous System for IT:

Visibility across applications, infrastructure and network. This pillar is largely provided in various forms across Cisco and AppDynamics today. AppDynamics can already provide visibility into SAP and IBM environments as well as cloud and IoT.

AppDynamics is adding a serverless agent for AWS Lambda to add monitoring like any other application. AppDynamics will also integrate with Cisco's Application Centric Infrastructure in a move that highlights collaboration between the application and networking teams.

Insights to save time on troubleshooting to focus on business metrics and better experiences. Think of the insights pillar as a giant data ingestion effort that uses machine learning for analysis. Parts of this pillar exist within Cisco and AppDynamics today.

Action and automation to automate problem solving and optimize via the Cognition Engine.

Of those new products by AppDynamics, the Cognition Engine may have the most impact.The return on investment pitch for the Cognition Engine is that it'll evolve and evaluate data in real time via streaming data and then detect anomalies as well as automate root cause analysis.

The integration with AWS Lambda highlights the rise of serverless computing as well as the heft of AWS.  AppDynamics is giving AWS Lambda first-class citizen status with more conventional infrastructure and applications. AppDynamics Serverless Agent for AWS Lambda is available as a beta trial. What serverless architecture really means, and where servers enter the picture

And the effort to integrate with AppDynamics with Cisco's ACI architecture is overdue. Yes integration takes time, but Cisco's ACI is a big focus for the networking giant and I would have thought it would have happened sooner.