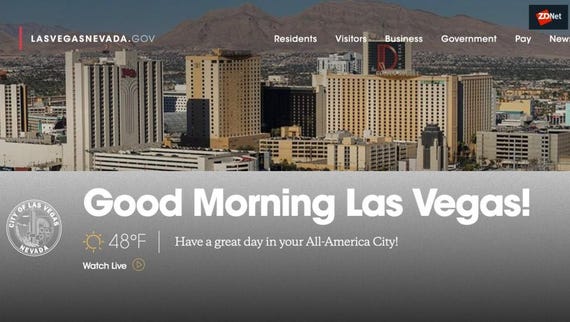 Officials from the city of Las Vegas said they narrowly avoided a major security incident that took place on Tuesday, January 7.

According to a statement published by the city on Wednesday, the compromise took place on Tuesday, at 4:30 am, in the morning.

The city said IT staff immediately detected the intrusion and took steps to protect impacted systems. The city responded by taking several services offline, including its public website, which is still down at the time of writing.

City officials have not disclosed any details about the nature of the incident, but local press reported that it might have involved an email delivery vector.

In a subsequent statement published on Twitter on Wednesday, the city confirmed it "resumed full operations with all data systems functioning as normal."

"Thanks to our software security systems and fast action by our IT staff, we were fortunate to avoid what had the potential to be a devastating situation," it said.

"We do not believe any data was lost from our systems and no personal data was taken. We are unclear as to who was responsible for the compromise, but we will continue to look for potential indications," the city also added.

Since this is believed to be an email-based compromise, the type of attack the city avoided can be anything from something as complex and dangerous as a ransomware infection that triggered after an employee opened a boobytrapped email, to something as mundane as a phishing attempt that tried to get an employee's credentials.

All in all, Las Vegas officials can count themselves lucky, especially if this was an attempt to infect the city's network with ransomware.

Major US cities like Atlanta, Baltimore, and more recently New Orleans have suffered ransomware infections over the past two years, and all needed months to recover, and paid millions of dollars to secure and rebuild IT networks.