Cloud computing, big data, security: What CIOs are spending their budget on this year

What CIOs say they need to invest in to succeed, and what they are actually going to spend their IT budgets on, may not be the same things.
Written by Steve Ranger, Editorial director, ZDNet on Jan. 25, 2018 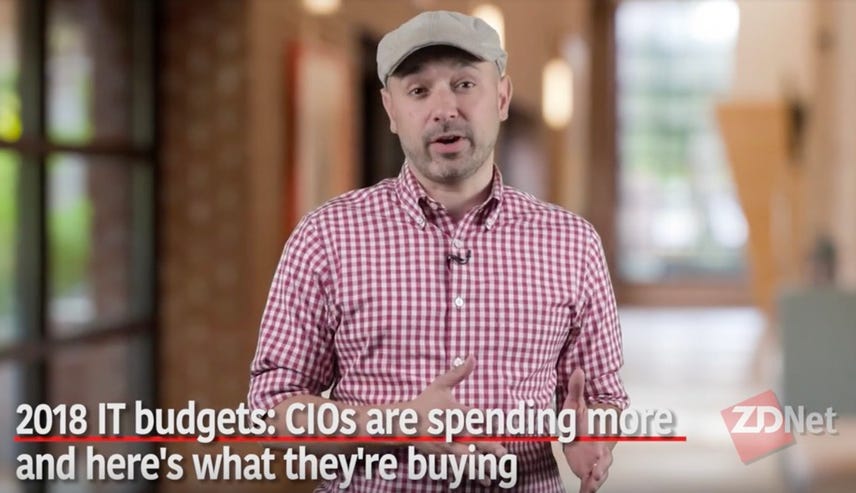 Video: 2018 IT budgets: Where CIOs are spending the money

Cloud computing, cybersecurity, and data analytics are the top technologies that government CIOs need to harness to achieve their aims.

Digital transformation is the top-ranked business priority among government CIOs overall, followed by security and governance, according to Gartner's survey of 461 government CIOs from around the world.

"Digital transformation revolves around data. To be successful, public sector CIOs need to focus on expanding their data and analytics capabilities and creating a data-centric culture, by increasing the availability of open data and APIs for internal use and public consumption," said Rick Howard, research vice president at Gartner. "Building out data analytics infrastructure is fundamental to improving government programme outcomes and services to citizens."

Digital transformation is ranked slightly higher as a priority in government than in the private sector, which perhaps puts a greater importance on growth and market share. The next business priorities for government are: security; safety and risk; and governance, compliance and regulations.

When asked which technology investment is most crucial to achieving their organisation's goals, cloud and BI/analytics came out top, followed by infrastructure/datacentre at 11 percent (national CIOs put customer relationship management as a distant third).

Government CIOs' tech priorities differ from their private-sector counterparts: while artificial intelligence ranks in the top 10 technology areas for CIOs overall, it's only 19th for government CIOs. (The exception is defence and intelligence, where more CIOs did list it as a priority).

Cloud services/solutions and infrastructure/datacentre combined was ranked in the top 10 by 30 percent of government CIOs, compared with only 12 percent in all other industries. In contrast, digitalisation/digital marketing in the private sector sits at 16 percent -- more than twice the rate in government.

The Internet of Things is a top 10 item for all industries, but is not present for government, apart from in local government -- likely due to smart city projects -- and in defence and intelligence, which relies on data flowing from sensors monitoring a wide range of activity.

"Many government CIOs are rebalancing capital expenditure and operating expenditure spending patterns to reduce technical debt, while making the strategic shift to cloud," said Howard. "They should consider cloud as the means to accelerate the digitalisation of their organisations and enable the business optimisation that results."

CIOs' priorities for tech investments don't necessarily align with the technologies they think can help them success. While CIOs said they would boost spending on cloud, analytics and infrastructure/datacentre, other issues get a look-in too.

Only five percent of government CIOs considered security and risk as crucial to achieving the organisation's mission, but 17 percent expect to boost spending in cyber/information security. While security might not be a competitive differentiator for government, CIOs still acknowledge that spending is needed.

"The lessons of reputational damage and individual harm that can result from a data breach or compromised security have not been lost on business leaders," Howard said. "Consequently, they're willing to allocate more resources and attention to lower risk exposure from cyberattacks."

The 2018 IT budget outlook is positive, as 10 out of 12 members of TechRepublic's CIO Jury report they're expecting either no changes or increases next year.

Why CIOs have bigger IT budgets for 2018, and what they're buying

Beyond specific technologies and projects, tech leaders are thinking a lot about finding and developing the talent they need to succeed.

Is your company's IT budget in line with the latest business tech spending trends? (TechRepublic)