By Larry Dignan for Between the Lines | March 14, 2019 | Topic: Artificial Intelligence 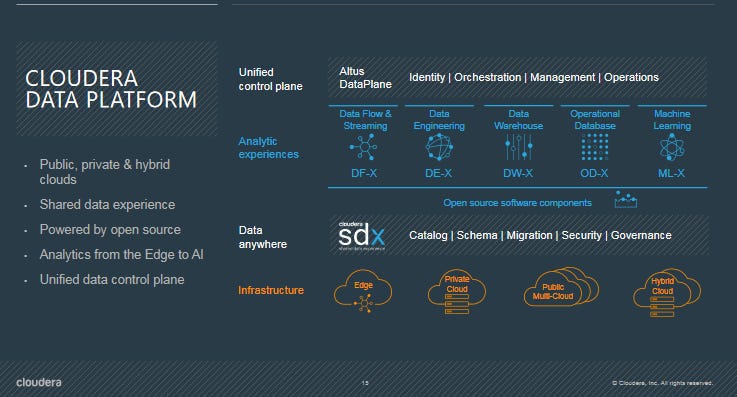 Cloudera CEO Thomas Reilly said the company's integration with Hortonworks--an acquisition that closed January 3--has been largely straightforward with plans to deliver the Cloud Data Platform over the next two quarters.

However, the company's fourth quarter results and first quarter outlook were disappointing relative to Wall Street estimates. What's unclear is whether analysts had modeled Cloudera correctly with the Hortonworks deal closing weeks ago.

Reilly, making the comments on Cloudera's fourth quarter conference call, made the case for the company's enterprise data cloud strategy. The enterprise data cloud, or EDC, is multicloud and hybrid, address multiple analytics functions, offer governance and use an open architecture that can tap into multiple data stores.

The Cloudera CEO said the company's EDC strategy will first be realized via its Cloudera Data Platform. Reilly said:

We are well on our way to delivering the first instantiation of enterprise data cloud, which combines the best of Hortonworks and Cloudera's platforms. We call this new offering the Cloudera Data Platform or CDP. In the next 2 quarters, we plan to deliver CDP as a public cloud service. Later in the year, we will offer CDP for the public cloud -- for the private cloud, bringing a public cloud-like experience directly into the data center for enterprise customers.

With CDP, our existing enterprise customers will be able to easily extend their data center deployments to a native cloud service in the two most popular public clouds, AWS and Azure. The initial release of CDP will also offer a full complement of open source data management analytic functions, including data warehousing and machine learning, all delivers native cloud services. Ultimately, CDP will also provide a single control plane to manage all the infrastructure, data and workloads across hybrid and multi-cloud environments.

Where things will get interesting for the new Cloudera is the competition. Reilly said:

So last year, our #1 competitor was Hortonworks, and it was Cloudera. Now that we are one combined company, it will do many benefits. We believe that we don't have to discount as aggressively because we're not as directly competitive. We believe that we will shorten sales cycles. A lot of companies are already -- if you would just look at the number of new customers we add this past quarter, there's an acceleration because we're viewed as kind of the standard. And now, who's our competitor? It's Amazon. And we quickly -- just even in Q1 as we look at our competitive road map, it's Amazon -- not Amazon as a company. Amazon is a partner, but it's Amazon's house offerings in the data management analytics space, and we believe that we are well positioned to compete against them because our value proposition is to be an enterprise data cloud company, given our customers a multi-client hypercloud passion and then our capabilities from the edge to AI.

As for the merger integration, Reilly said the company now has 2,000 enterprise customers with less than 10 percent of them broadly adopting Cloudera's platform. The plan is to cross-sell and up sell customers, leverage back-office, systems and facilities efficiencies and get sales, engineering and marketing all going in the same direction.

Cloudera's fourth quarter included some of Hortonworks. The company reported a non-GAAP loss of 15 cents a share, compared to estimates of a loss of 11 cents a share.