Cast your mind back to the weird days of 2011, and ASUS produced some of the wildest designs to ever appear in the world of mobile.

Take the Fonepad. It was a tablet that you parked your mobile phone into, but it never set the world alight. In fact, it was pretty much laughed out of existence. While the head-scratching design may have been hard to understand, the desire to unite the worlds of mobile computing were clear.

Fast forward six years, and on the back of Samsung's new Dex dock, convergence is back with a manufacturer that has the ability to ship a vast number of units if it is able to nail the design.

But getting to this point has left a number of players behind who were the vanguard of the original convergence.

The latest player to depart the convergence field is Ubuntu, the Linux distribution that decided it needed to reinvent every wheel in pursuit of the idea that a phone was capable of driving a desktop as well.

With its fixation on the now ironically-named Unity environment, which was intended to provide a single user experience across all modes of computing, Ubuntu managed to divide its users and its attached community. The price of such furore may well have been worth it had the vision been able to be accomplished, but with Ubuntu dictator-for-life Mark Shuttleworth deciding to pull the plug last week and return Ubuntu to GNOME and Wayland in favour of continuing with Unity and Mir, the efforts have come to little.

Also leaving the mobile phone game entirely is Intel, which after multiple attempts to dominate the phone landscape in the same manner it controlled desktop computing, departed the scene without managing to establish a sizable beachhead, and left the field to ARM.

Pushing the state of convergence forward has now fallen to Microsoft with Windows Continuum, and Samsung pushing Android with its windowing extensions.

In a recent review of the HP Elite x3, many of the requirements needed to make convergence a proper concept were ticked, but some were sorely lacking. In the case of the Elite x3, it really could have done with a bunch more RAM, and a better Snapdragon processor.

After using a 3-in-1 device, it's clear the first computing platform that will feel the pressure from any convergence will be low-end computers such as Chromebooks, but phones are always going to have the additional restrictions of having to pack all the hardware needed into a handheld form factor, whereas Chromebooks will have relatively plenty of space to play with. Any laptop style device that is beaten by a phone in a benchmark is merely a result of age, or OEMs selling bad combinations of hardware.

Chromebooks are able to displace laptops due to being 'good enough' in comparison, and so the same applies to convergence devices competing against low-end laptops.

By the end of my time with the Elite x3, there was part of me that wished instead of a Snapdragon, the phone packed one of the energy-hungry Intel chips that would be able to ramp up its output when hooked to a power supply on a dock -- but that will not come to pass.

The other disappointing feature of Continuum was its half-baked nature. Despite being the selling point of HP's device, it was clear that Continuum is a work in progress rather than a fully-formed implementation.

Samsung's new Galaxy S8 has a leg up on the Elite x3 by being a year older and able to use the Snapdragon 835, and with the rumoured addition of a couple of extra gigabytes of Ram in South Korea and China, the S8 brings a better hardware package to the game than the Elite x3. This does not guarantee users will be able to use this device in desktop mode for anything more than web browsing and email and walk away satisfied, though.

Lurking in the background could be the giant from Cupertino. A recent patent application showed that Apple had thought out the idea of docking a phone into a laptop, and would use the phone to do the processing for a dumb laptop, a la Elite x3.

Should the company decide to make a run at convergent computing, it will be interesting whether the Apple approach is able to bust through the carnage of other convergent attempts and deliver a decent experience.

Convergence is unlikely to hit the big time in the next couple of years, but with the concept being pushed forward by more than one vendor, at least the dream is well and truly alive. And in a world of stagnant and saturated computing, it's nice to have a couple of dreamers around the place. 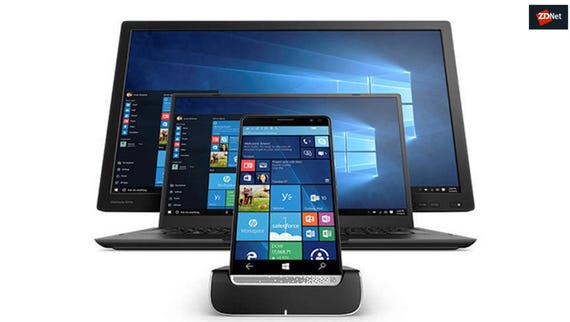