Coronavirus: Apple and Tesla reveal the new products they're making in COVID-19 fight 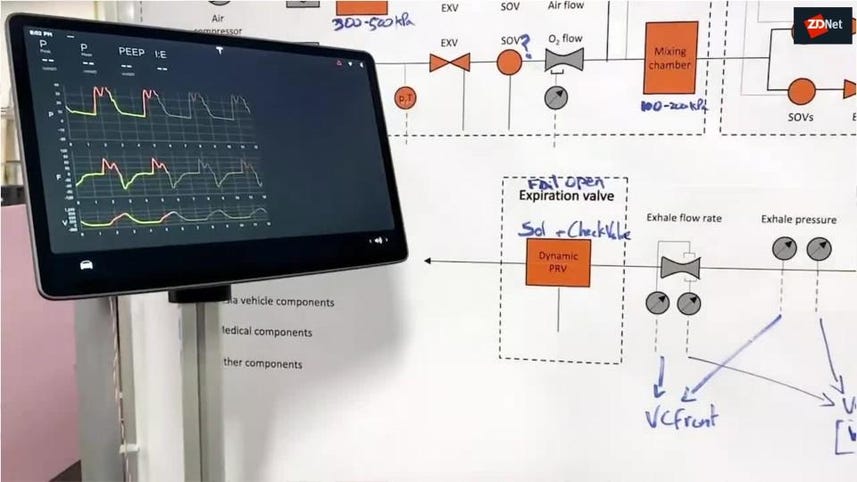 Electric car maker Tesla and tech giant Apple have revealed progress in their respective plans to help the healthcare industry make up medical equipment supply shortages amid the coronavirus pandemic.

Two weeks after Tesla CEO Elon Musk said the company will make ventilators if there was a shortage at hospitals, the company's engineers have posted a video on YouTube showing two versions of a prototype ventilator that's being built at a Tesla factory using components from Tesla vehicles.

"We're trying to make some ventilators out of some car parts so that we can help out the medical industry without taking away from their supply," said a Tesla engineer talking through a face mask.

The first Tesla prototype ventilator includes a mixing chamber – a part used in Tesla vehicles – which mixes oxygen and air for the ventilator. It's connected to a pressure sensor and flow-rate sensor.

The 'package version' of the prototype features a ventilator test screen that shows the pressure, flow and volume of oxygen being pumped. The display is powered by the Tesla Model 3 infotainment computer, which also is used to communicate with vehicle controllers that make up the ventilator.

The prototype also includes a backup system with an oxygen tank and backup battery and an air compressor that offers about 20 minutes to 40 minutes of disconnected oxygen supply if medical workers need to move a patient to a different area of a hospital.

It's not clear when Tesla might be able to ship the Tesla ventilator, which would still need to pass tests by the Food and Drug Administration. Tesla engineers said there is still much work to be done to deliver a Tesla ventilator.

Tesla engineers have provided an update on the company's ventilator, which is made from existing car parts.
Source: Tesla/YouTube

Cook said Apple had sourced over 20 million face masks through its supply chain for distribution across the world.

"This is a truly global effort and we're working continuously and closely with governments at all levels to ensure these are donated to places of greatest need," said Cook.

The model Cook showed is a plastic transparent shield that covers the entire face and has a band at the rear for adjusting the shield to the wearer's head.

The first batch of face shields is intended for US hospitals where protective gear is needed most urgently. However, Cook said that Apple hopes it can "quickly expand distribution beyond the US". Cook said Apple's focus is on "unique ways Apple can help".

Social Media
Musk did not seek due diligence and the $44b deal will be completed: Twitter