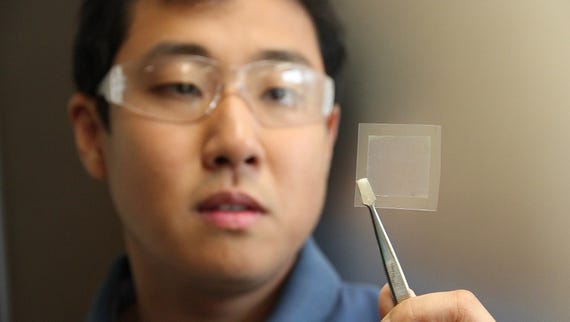 It should be common sense, and not bear repeating, but faced with the prospect of senators concerned that Australia's supply of startups is disappearing, Commonwealth Scientific and Industrial Research Organisation (CSIRO) CEO Dr Larry Marshall has dropped a dose of reality: Companies commercialising actual science are better for Australia than your latest Snapchat clone.

"I think there is a bit of a misconception on what a startup is these days, because startups are just SMEs after the media has lost attention, once they become real companies," Marshall told Senate Estimates on Thursday night.

"In CSIRO, we do digital innovation, but we also do deep science innovation, things people generally don't think of as tech or innovative, but they are. Things like cotton, we are actually developing, believe it or not, a cotton that doesn't need to be ironed, that competes with the properties of synthetics."

Marshall said science is a wellspring for startups, but, because it's outside the realms of digital technology and the internet, is viewed differently.

"From our perspective, they are every bit as innovative, in fact, in many cases more so and have, I think, a more profound impact often on the economy," Marshall added.

The CSIRO chief did point out, though, that the science organisation is doing its part to boost digital startups in Australia as well, supporting initiatives like its On accelerator and the AU$200 million CSIRO Innovation Fund.

"We've taken hundreds of teams from over 30 publicly funded research institutions through our science accelerator, we've spun out a number of companies both from CSIRO and from those other institutions," Marshall added.

"We house a large number of SMEs and startups across CSIRO's 57 sites nationally, so I think we've made a profound difference."

Earlier this month, the CSIRO Innovation Fund parted with AU$1.25 million to back a trial by RapidAim, a company founded by a trio of CSIRO alumni, to conduct a trial of a smart trap fruit fly monitoring system that is hoped will replace manual trap checking.

Fruit flies ruin fruit and vegetables by laying eggs inside them, with their maggots eating the produce from the inside. The CSIRO said spoiling due to fruit flies costs Australia over AU$300 million each year.

"We brought in Temesek and Lockheed Martin for that fund. So I think we've had a profound step-change, if you like, in the system as a result of our agenda."

CSIRO also detailed on Thursday night how it is working with the Commonwealth Bank of Australia (CBA) to investigate the use of blockchain in government procurement.

"What Data61 have been looking at is can you use the blockchain technology to have a distributed ledger of money so that when a department allocates money, the role it is allocated to is understood, the person who can spend it is understood, and the time window it can be spent in is understood and controlled," CSIRO executive director Dr Dave Williams said.

"It allows everyone to understand where the money is, why it is there, and how it is spent."

Williams said the proof of concept is still in the testing phase.

The partnership of Data61 and CBA is also looking into blockchain-based payments for Australia's National Disability Insurance Scheme (NDIS).

"Programmable money represents an opportunity to re-envisage how we think about money and how payments function across the economy," CBA head of experimentation and blockchain Sophie Gilder said earlier this month.

Data61 said a blockchain-based app has been developed to allow individuals and carers to find, book, and pay for services from NDIS service providers without the need for paperwork or receipts, and is already being tested.

"We're particularly interested in the broader research opportunity around programmable money, because it should reduce friction in business transactions and enable companies to create new business models and innovative ways of delivering and paying for products and services. This would benefit customers and reduces the administrative burden involved in managing payments," Dr Mark Staples of Data61 added.

In August, CBA settled a AU$110 million blockchain bond between itself and the World Bank.

Unusually for Canberra, Marshall's comments were the second dose of common sense to appear this week, following Digital Transformation Agency (DTA) stating on Tuesday that currently, for every use of blockchain, there is a better alternative.

"Blockchain is an interesting technology that would well worth being observed but without standardisation and a lot of work to come -- for every use of blockchain you would consider today, there is a better technology -- alternate databases, secure connections, standardised API engagement," DTA chief digital officer Peter Alexander told Senate Estimates on Tuesday.

"Blockchain: Interesting technology but early on in its development, it's kind of at the top of a hype cycle."

Alexander pointed out that although blockchain can be used in low-trust environments, the government wants to have trusted relationships and know who it is interacting with.

Sensors and automated traps will be used to monitor the pest that causes AU$300 million annually.

The CSIRO Energise app has been developed to allow individuals contribute to national energy research in Australia.

The CSIRO is using AWS Lamba to allow analysis of the 20 exabytes of data coming from genomics every year.

The top 5 personal technologies that will disrupt digital business (TechRepublic)

Personal technologies have moved from the home to the enterprise, and IT leaders must prepare for their impact.

Join Discussion for: CSIRO: Our science startups are better for...