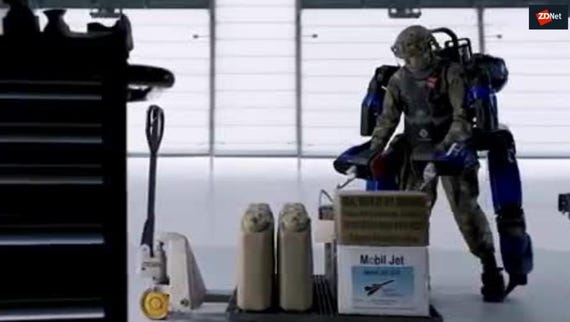 One of the most interesting technology stories of the past few years has centered on a decidedly legacy industry: Construction. There's increasing competition between technology developers to bring new efficiencies to the job site, and it's coming from firms working in areas like robotics and artificial intelligence.

I was reminded of this when I learned that a company called Buildots is pulling down $16 million for their AI construction solution which is based around hardhat-mounted 360-degree cameras. That's a relatively benign tech upgrade, perhaps, but it's part of a larger trend: Much of the tech development in construction is focused on augmenting humans with technology, pointing to a future of hybrid man-machine workers.

Some of the more eye-catching technologies coming online now include wearable robots. A company called Sarcos, for example, makes a robotic exoskeleton that enables humans to lift and manipulate incredibly heavy objects with ease. While these suits aren't yet common on job sites, it's easy to see what's coming.

The reason for the rush to make human construction workers stronger, faster, and smarter is related to the disquieting fact that productivity in construction has actually fallen in half since the 1960s. The sector has not kept pace with innovation, and as I've written, the diesel-powered hydraulic machines you'll find on most construction sites today remain essentially unchanged from those rolling around 100 years ago.

As a result, there are massive inefficiencies in the industry. According to KPMG's Global Construction Survey, just 25% of projects came within 10% of their original deadlines. When it comes to megaprojects, like large infrastructure projects, McKinsey found that 98% are delayed or over budget. 77% are more than 40% behind schedule.

In contrast to Sarcos' robot, the Buildots camera is a more incremental tech add-on. The idea is that workers or project managers wear cameras to capture every detail during daily site walkthroughs. It brings to mind a system developed by competitor OpenSpace, which came out of stealth a couple years back. Using AI, the captured information is stitched together in a useful way. OpenSpace focuses on project overruns, promising its solution helps keep building on schedule. Buildots' platform uses the captured imagery and compares it to the building's design plans, checking for the slightest deviation or omission. "Think a missing electricity point or an AC vent 3 inches to the left," a company rep told me.

This could help stem a big inefficiency problem in the sector, particularly as housing crunches in places like Los Angeles, where I live, intensify. Right now, project managers record mistakes and anomalies manually, and, depending on the size of the project, they may be expected to keep track of 100,000+ tasks. McKinsey recently found that construction inefficiency is costing the industry $1.6 trillion a year. That represents a massive opportunity for technology firms, which are now racing into the space.

Buildots, a UK and Israel-based company, was founded in 2018 by three graduates from 'Talpiot', the creative engine of the Israeli Defense Forces and its most prestigious unit. It counts among its clients two of the ten largest construction companies in Europe, as well as the largest Israeli construction firm. Riding the new cash infusion, Buildots has plans to make its product available to the US market in the coming year.

Join Discussion for: Cyborg construction workers and the quest...