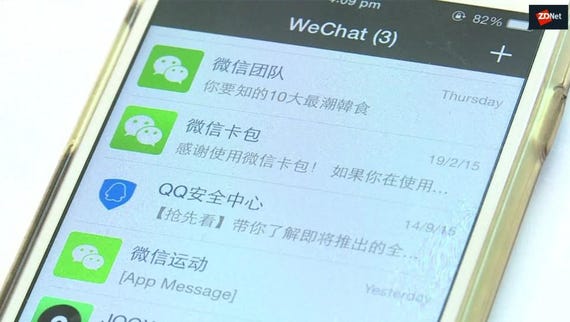 In China, WeChat breaks all records (with a little help from the government)
Watch Now

WeChat, the popular messaging app in China and some overseas countries, has registered further growth in the past year with as many as 1 billion users opening their WeChat account daily in the past year, Chinese technology giant Tencent announced on Wednesday.

In the summary of WeChat's overall performance last year, 45 billion messages were sent on a daily basis on the platform, while 410 million audio and video calls were made every day. The usage of WeChat has expanded by nearly 6 times compared to three years ago, with people "meeting in WeChat" instead of "meeting in person" now being the norm in China, said the Chinese company.

The average number of contacts on each WeChat account has also more than doubled last year compared to three years ago, and 63 million users aged above 55 years old open their WeChat account at least once a month.

Although WeChat's overall momentum slowed during the past year -- following rocketing expansion in user number growth over the past years -- WeChat's user base still saw considerable growth in 2018 as its average daily users topped 1 billion. This follows WeChat passing the milestone of having over 1 billion monthly active accounts during the Chinese Lunar New Year in February, 2018.

Apart from the Chinese market, WeChat is also used widely in Southeast Asian countries as well as some developed economies where Chinese enterprises and ethnically Chinese people have a notable presence.

WeChat is also more than just a messaging app in China as it incorporates other functions, including mobile payments and social networking and life services such as ticket booking, food delivery, and credit card payments.

WeChat's popularity in China is also assisted by the favourable regulations enforced by the Chinese government, which has banned the use of many overseas messaging and social media apps such as WhatsApp, Facebook, and Line which require a VPN to be accessed in China.

The popular Chinese messaging app still lags behind other leading social media apps like Facebook and WhatsApp, which have larger user bases and wider coverage geographically.

The world's largest fintech outside Asia gets more firepower to develop its local footprint.

Tencent has seen its shares dip to their lowest point in years in Hong Kong amid the global sell-off in recent weeks.