Managing obsolescence is a huge challenge for platform vendors. There are usually two opposing forces driving the challenge: inertia and entropy. While both inertia and entropy can be described in some depth using actual science, for our purposes we'll summarize the terms in this way: people don't like to change and stuff breaks over time.

Take, for example, Windows XP. There is no doubt, from a technical and security point of view, that XP is long past its expiration date. It is actually dangerous to run on the Internet. But there are a whole lot of people who have been using XP forever, know it intimately, and don't want to give it up.

Then there are the systems built around XP. I had a content management system that ran on a development environment that would only run on 32-bit Windows XP. It took three years to move that beast away - three years of time-consuming and costly coding. There are machines and systems all over the world that would have to be substantially recoded and built - sometimes from scratch - to move off of XP.

There's also the cost. Sure, PCs are now dirt cheap. But a thousand dirt cheap PCs start getting really expensive. Many companies and individuals are loathe to spend the money to buy systems that replace perfectly good machines.

So despite all of Microsoft's efforts and all of our cajoling and warning, XP lives on.

While Windows XP is a no-brainer in the "must not use anymore" category, Windows 7 is a much more difficult challenge for Microsoft. Windows 7 is probably the most loved of Microsoft's modern operating systems: It was a clear home run, and -- due to Microsoft's incredible missteps with Windows 8 -- is the last truly trusted Microsoft operating system in many users minds.

For many users -- myself included -- there is no reason to upgrade existing machines to Windows 10. Windows 7 is perfectly functional, as safe as Windows machines are going to be, familiar, and rock solid.

And yet, overcoming upgrade inertia is not a Microsoft-only problem. I have a Mac mini running Mountain Lion (that's four revs back now in OS X land), but it's running my studio and I don't want to make changes until I can be sure everything will upgrade. Some of the specialty-video software I rely on doesn't support the more modern OS versions, so for now I'm leaving it un-upgraded.

This, of course, reinforces the system vendor's dilemma: supporting old systems is costly, regressive, and encourages users to run potentially unsafe gear. By contrast, getting users to upgrade keeps the flow of revenue going, while letting old systems gather moss doesn't do much for the bottom line.

Of course, it's in Microsoft's - and Apple's and Google's - best interests to encourage uptake of new OS releases. This isn't just about cash. After all, while all three companies need to continue to stoke the fires that drive their bottom lines, they're all very nicely profitable businesses with working business models.

They also need to drive OS upgrade uptake to keep their customers safe, to drive adoption of new gear, to keep the excitement level up, and to respond to all the opportunities created by the relentless pace of innovation across the industry.

And goodwill will be lost

This weekend, Microsoft once again landed on my (insert profane term for excrement) list. About three and a half years ago, I bought a super high-end custom Sager 9150 laptop to serve as my primary work machine. At the time, it was about as RAM and SSD rich as possible, and it cost a mint. It was my main machine, and my main cycle-burners often require top-end power and their cost reflects that expense.

In any case, the Sager lasted about 15 months before I needed something even more powerful for my main work machine. But that didn't mean I retired the Sager. I just moved it off my desk area to run our big screen.

My house is also where my wife and I work, so we have a lot of systems set up to do double duty. While we have a big screen TV that can be used for Game of Thrones binge watching, it's tied to the Sager and is often used as a conference room white board, collaborative writing environment, and design space. I'm also sitting comfortably on the couch right now, using it to write this article.

We rely on that Sager. It runs Windows 7 and - until recently - has been rock-solid. That is, it was rock-solid until Microsoft started to harass us about upgrading the Sager to Windows 10.

Let's make this clear: it is not wise to upgrade this machine to Windows 10. It is a custom-built one-off machine with specially-tuned drivers. When I last contacted the folks at Sager about upgrading it, they started mumbling about inadvisability and you takes your chances. In other words, it's not supported.

My Sager 9150 was designed and lovingly optimized for Windows 7. No one knows what would happen if a Windows 10 upgrade were to be attempted, but everyone there generally shares the hair-on-the-back-of-the-neck feeling of it-would-be-ungood.

As I said back in July, I have no intention of upgrading the Sager to Windows 10. But Windows 7 on the Sager no longer agrees with that plan. A few months back, I started to get the GWXUX error shown at the top of this article. It means that the Get Windows 10 nag process is failing. 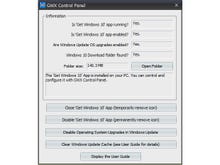 Your PC stuck in Windows 10 "reschedule or upgrade now" limbo? Here's a fix

The fix comes in the form on an update to a third-party utility called GWX Control Panel, an excellent utility that has previously allowed users to opt out of and avoid the nags to upgrade to Windows 10.

Since the message only showed up once every few weeks, I ignored it. But apparently, Microsoft really wants me to upgrade, because this weekend, the message has been showing up pretty much constantly.

Adrian wrote a piece just Friday about how to remove Windows nag prompts, but I'm annoyed because I don't want nag messages and I don't want to install a hack to avoid them. I'm not planning to upgrade because the manufacturer has stated it would be ill-advised.

I'm certainly not planning to upgrade when even the upgrade nag message can't seem to run without failing.

And yet, I expect I have many months (or even years) ahead of me, facing this sort of message, unless I take another probably inadvisable path of installing a piece of third party software to hack the GWXUX code to stop it from being annoying.

This is where I find myself at odds with Microsoft and disagreeing with its aggressive upgrade approach. It's important to get people off of Windows XP. But Windows 7 is (at least for now), just about as perfect an implementation of a Windows system as we're likely to see for the next decade. 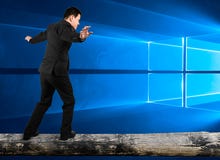 It's perfect, of course, unless Microsoft goes out of its way to break it, in a misguided attempt to convince us all to move to its new version. But I'm telling you... breaking my computer is not going to inspire confidence, and it's not going to inspire me to upgrade to another Windows version.

The fact is, I'm now running a lot of Macs around Camp David, although many of them are running Windows 7 and Windows 8.1 in either Parallels and Boot Camp. If Microsoft breaks my existing machines, I'm now more likely to move to a Mac than another Windows machine. I'm also less and less likely to run Windows on those Macs, even in virtualized instances.

The only gotcha is that Apple, too, is nagging about OS upgrades. Apple wants me to upgrade to El Capitan, which some people report is solid, while others report it has bugs and more bugs.

That said, I would upgrade to El Capitan now, except for one small issue: Office 2016 breaks on El Capitan.

Yep, this whole article ends in an irony: Microsoft is pushing me to upgrade my Windows 7 machine, but because the upgrade nag is breaking, I'm not going to upgrade. And I'm not upgrading my Mac because... wait for it... Microsoft software can't handle the upgrade.