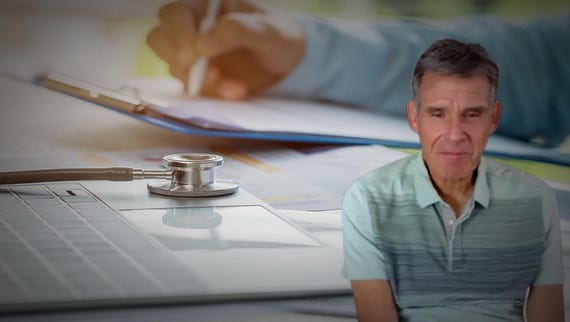 Diagnoses of diabetes, a condition where the body can't properly process glucose, have doubled in recent years, and nearly 9% of the global population now has the condition.

But just because diabetes is common, it doesn't mean it isn't serious: diabetes can leave people blind, needing an amputation, and with a higher risk of heart disease. Treating diabetes accounts for £1 in every £10 spent by the NHS in the UK, and $327 billion a year in the US. So could technology give diabetics a better way of managing their condition?

For a long time, to get their glucose reading, diabetics would have to prick their finger with a needle, squeeze out a drop of blood, and then use a handheld device to assess how much sugar was in it. It's a far from ideal process – it only gives a snapshot of glucose control, not a long-term view. It has to be repeated several times a day, and it's tricky and painful to boot.

Technology aimed at insulin-using diabetics became mainstream a few years back with the arrival of continuous glucose monitoring (CGM) devices. These use small sensors that sit on a diabetic's body, monitoring their blood sugar levels constantly and relatively unobtrusively, through a small tube that samples the amount of glucose in the interstitial fluid. This technology is transforming diabetes control for its users. By giving them a better view of what their blood glucose was doing, CGMs enabled insulin-dependent diabetics to take steps to keep readings in the right range.

As well as being more convenient, CGM offers a direct pay-off for diabetics' health too: those with better glucose control are less at risk of developing debilitating and life-threatening complications.

Now the companies that make these readers are looking to take advantage of broader technology trends to enable diabetics to better manage their condition.

The systems from Dexcom, one of the largest makers of CGM devices, are "a mix of medical technology with consumer technology", says its CTO Jake Leach. Whereas once CGMs would send a user's glucose reading to a separate handheld device, now makers are looking to exploit the potential of wearables and smartphones. Users can get their readings sent over Bluetooth Low Energy to hardware including iOS and Android phones and watches.

"The smartphone platform really opened up a lot of functionality that is not typical in medical devices," Leach explains.

One of the new features enabled by smartphone and mobile app use is remote monitoring. Through the Dexcom app, parents now keep an eye on their children's glucose levels even when they're not with them.

"The parent has the safety blanket of knowing how things are going. They can set up alerts and alarms that can communicate if  there's an issue that has to be dealt with, so they don't have to worry as much," Leach says.

Remote management isn't only taking place between parents and children – glucose readings are getting social, with the app allowing users to share their readings with a handful of friends and family via smartphone. Remote monitoring users who share their readings with others have lower average glucose readings, less time spent with low glucose, and more in the normal range, says Leach: "The folks that utilise that technology have better glucose control than those that don't and we kind of attributed it to the fact that they've got others helping them manage their diabetes."

As well as friends and family, CGM users can share their readings with their medical team. Glucose-monitoring apps can give physicians a long-term overview of how their patient's blood sugar has been doing, and why – whether it's spiked or fallen due to a new medication or lifestyle change, for example. This can help guide how they treat the condition. "Diabetes is such an evolutionary thing and it develops over time and changes. You have to always be looking to change the way of managing it," Leach says.

SEE: The NHS wants more data about your health - and your smartphone could be the answer

For those who are keen to share even more, Dexcom's CGM app can feed data into other health apps through both Apple's HealthKit and Google Fit.

Dexcom already has a link with Google beyond its integration with Android: the CGM company inked a deal with Verily, the life-sciences arm of Google's parent company Alphabet, back in 2016 and amended it this year. The first hardware to sprout from the R&D partnership will be Dexcom's next generation of CGM, the G7. Unlike its predecessor, the G7 will be an all-in-one design carrying Verily electronics as well as Dexcom sensor tech onboard, and is expected to launch next year.

Verily and Dexcom have also teamed up on software, with Verily helping out with user engagement – how to make sure that the app can keeping gaining functionality without making it too confusing for people that haven't used the app, or continuous glucose sensing, before.

However, CGM technology could ultimately be rolled out to people with type 2 diabetes, and those in the pre-diabetic range – people whose blood sugar is higher than normal but not yet diabetic. The idea of getting people who aren't on insulin to use CGM is to show the impact of certain foods and behaviours on their glucose levels, and so help them to keep levels in the right range.

"Until you really have direct feedback, it can be hard to really understand why that's important," Leach says. "I think there can be a whole lot more around that coaching or the advice or the analytics that you put around the data to help you get more people with either pre-diabetes, or even with just general health and wellness. I think there's a lot of opportunity and there's quite a few pilots we're entering into any different areas to learn more about what works for those users."

For the traditional CGM user base – people who control their diabetes with insulin injections – the next few years are likely to bring another sea-change in technology with the advent of closed-loop or 'artificial pancreas' systems, single units that both monitor glucose and deliver insulin accordingly.

SEE: Apple's Research app: What does it want your health data for?

Other developments that could reshape diabetes management are on the horizon: technology that allows glucose readings to be taken non-invasively – that is, hardware that can measure blood glucose without the need for, well, blood. Researchers are looking to create systems that can measure glucose through sweat, tears or even just a user's vital signs.

"It is really challenging to measure glucose non-invasively," Leach says, "and no one has come up with a technology that is capable of measuring glucose to the kind of level of reliability and accuracy that's needed." Lots of companies are working on the field, but there's been no breakthrough yet – Google's own experimental efforts to monitor glucose through contact lenses was kicked into the long grass.

That said, the future of CGM is going to be tightly tied to the development of consumer tech like smartwatches or other wearables. "There's a good possibility that you're going to have even tighter integration than we have today with those types of products," Leach says.

Join Discussion for: Diabetes monitoring is having a smartwatch...