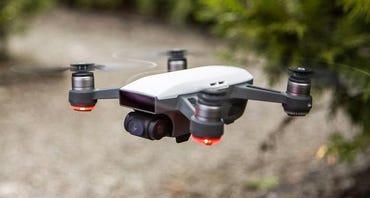 Drones are not only big business, they're increasingly big in business. Farmers, surveyors, home inspectors, Realtors and loads of other professionals have taken to the skies, using drones to capture photos and video.

But this is expensive, right? You need a pro-level flying machine and camera, plus an experienced pilot to control them both. That's gotta cost big bucks.

Not anymore. Modern quadcopters are pretty easy to fly, and you can get a very capable model for under $1,000 -- in some cases well under.

What features are most important? Assuming photography and/or videography are your key drivers, you'll want to choose a drone that has a 3-axis gimbal, which will keep the footage silky-smooth even if the drone gets buffeted by wind or makes turns while flying.

As for the camera itself, don't shy away from models that have them built in. You'll actually get more control than you would from a GoPro strapped to a gimbal harness -- and you'll avoid the cost of a GoPro.

Beyond that, look for drones with intelligent flight modes, meaning they can automatically orbit a fixed position or track a selected person or object. That will allow you to capture footage that would normally require some highly specialized piloting.

Just because this adorable little drone was designed with consumers in mind doesn't mean you can't use it for business.

Because its flight time is limited to around 10-14 minutes, the Spark is best for close-quarters filming (think: rooftops and selfie videos). Similarly, because it's on the small side, it's not ideal for windy environments.

Finally, consider spending a little extra to get the optional remote ($149), which will reduce the learning curve and greatly increase the Spark's range. Flying by app alone can be tricky. 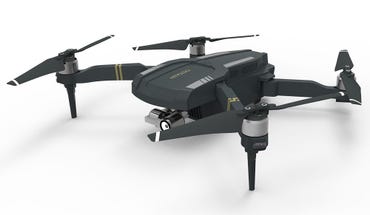 Make no mistake: This newcomer is an unabashed DJI Mavic Pro knockoff. It looks just like it, right down to the metal frame, folding arms and built-in nose camera. But there's one key difference: The C-Fly F803 doesn't cost $999. Currently, Rcmoment.com sells it for just $294.99 when you apply promo code RCF803 at checkout.

Okay, there are a few other differences as well. For starters, that SKU doesn't include a remote (or "transmitter," to use Rcmoment parlance). My advice: Get one by choosing either the black or white color option and paying $347.99 (after applying the same code). Seriously, you'll be a much happier pilot if you have two physical joysticks instead of two onscreen ones. And you'll still pay only one-third the price of a Mavic Pro.

Granted, the F803's camera tops out at 1080p rather than 4K, and don't expect it to capture quite the same quality of images. It might not be good enough for, say, your TV commercial, but it'll be fine for inspecting a roof for missing tiles or checking your herd's head-count.

The biggest caveat: This ships from China, so it could take 2-4 weeks to arrive. And getting help or repairs won't be nearly as easy as it would from, say, DJI. Sometimes a little risk is the price you pay for a low price.

Your thoughts? Know of any other inexpensive drones that might be a good fit for business?