My own Samsung Galaxy Note 5 arrives from T-Mobile today, but I saw a Tweet from Android Central linking to another detailed scientific test of the latest smartphone displays and I cannot wait to open up the package. According to DisplayMate's Dr. Soneira, the Samsung Galaxy Note 5 has the "best performing smartphone display that we have ever tested." 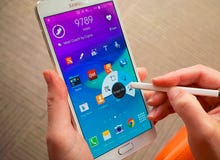 Samsung Note 5 removes two key features: expandable storage and removable battery While Samsung continues to radically change the Galaxy design, it's disappointing to see it apply those design trade-offs to the Note line. The LG G4 stands alone as the last flagship with a microSD card and removable battery.

As Dr. Soneira clearly states in his opening paragraph, the performance of the display is crucial to the success of the smartphone as it is the focal point for all interactions. Even though the Galaxy Note 5 has the same screen size and resolution as last year's Note 4, Samsung significantly improved the performance of the OLED screen.

Improvements include higher peak brightness, improved screen visibility and readability in high ambient light, higher display power efficiency. I was especially pleased to read about this technological improvement since the Note 5 has a slightly small, and non-removable, battery than the Note 4. DisplayMate's test results indicate this new display uses less power than the Note 4 so battery life may not be a concern. Results show a 21 percent improvement in display power efficiency.

I found the DisplayMate report to be fascinating, especially when discussing the various screen modes and color management. I admit to just using the default mode on previous Samsung devices, but plan to try out some of the other modes after being educated with this report.

The Samsung Galaxy Note 5 has the potential to be turned up to 861 nits with auto brightness in high ambient light and turned down to as low as 2 nits when reading in bed at night.

DisplayMate also performed tests on the Samsung Galaxy S6 Edge+, with very similar results. The S6 Edge+ has a curved flexible OLED display on a flexible plastic substrate while the Note 5 uses glass. Performance on the S6 Edge+ is essentially the same and Dr. Soneira expresses his pleasure with the useful edge functionality.

The Samsung Galaxy Note 5 and S6 Edge+ are currently the most expensive Android smartphones on the market, but if you want the absolute best display on your smartphone then it may just be worth the extra cost.