Drones are currently heavily regulated to be far from populated areas. The "Mavic Mini," a drone weighing under 250 grams, from drone king DJI, gives a little window into a future in which the devices might be allowed to fly more freely in populated areas.
Written by Tiernan Ray, Contributing Writer on Oct. 30, 2019 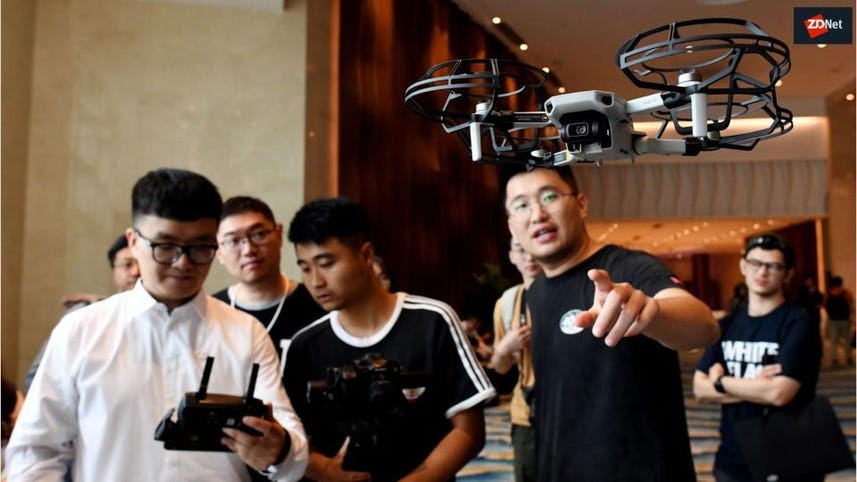 You can't fly a drone over midtown Manhattan, but someday, that may change.

A sign of the potential was the announcement Wednesday morning by leading drone maker DJI of what it calls the Mavic Mini, a drone weighing just under 250 grams, the first DJI has made so light.

That's significant because the US Federal Aviation Administration this year issued what's called a "draft notice of proposed rulemaking" that proposes that drone pilots shall be able to fly drones over areas where people exist in large numbers -- "over people" -- without the pilots obtaining a waiver, provided that the drones are under a weight limit of 0.55 pounds, or roughly 249.8 grams.

Hence, the Mini is DJI's bid for this new class of drones that may, if things go in that direction, be allowed to be flown in populated areas.

The idea is that if a drone were to suddenly lose power and plummet, it would be less likely to seriously injure a person if the drone weighs less than 250 grams. The Mini is spec'd to fly at 400 feet above its take-off plain, though the company can unlock the device for altitudes up to 1,500 feet, for things such as search and rescue missions that need greater reach.

The Mini is, indeed, surprisingly light and small when cupped in the palm of one's hand. ZDNet was given a demo and allowed to play with the thing earlier this week in Brooklyn, New York. The Mini is even smaller than last year's "Mavic Air," which was already a breakthrough in being a pocketable device.

This is not the first drone under 250 grams, but "the ones that have been out there are toys," said Brendan Schulman, DJI's vice president of policy and legal affairs. Schulman was an avid model airplane pilot before he got hooked on the policy side of things.

"They're not that substantial, they certainly don't have this kind of feature set," said Schulman. That includes things such as a half-hour of battery life, a three-axis gimbal for stabilization, and tons of software to help control the Mavic to make sure it can do things such as return to its launching place when it gets low on battery. The Mini has the same solid build quality of other DJI drones, with folding wings that tuck into the body of the drone when not in use with a satisfying snap.

On hand at the Brooklyn event was a tech influencer, Faruk, whose YouTube channel shows off all the latest kit. He offered some stunning footage of flying the Mini over the L.A. cityscape, through parks, and over piers. The Mini can shoot either 2.7K video at 30 frames per second or 1080p video at 60 frames per second. Noticeably, rather than flying around objects, such as a metal grating, the Mini in Faruk's videos flies right through the holes in the structure, taking advantage of its small size.

Faruk told ZDNet he liked that the Mini is somewhat stripped-down. Unlike the Mavic Air, it is not focused on things such as automatically navigating around objects, hence, the flight through an object. "It takes things back to a very basic level, I really liked that."

Faruk was also struck by the relative quiet of the drone. Indeed, if you've used the Mavic Air, the Mini is noticeably soft in its buzz. "I really appreciate that because it makes me feel more comfortable taking it where I might be around people, and I wouldn't feel like disturbing them." Faruk also praised how the Mini was able to fly in relatively rough winds. Despite its small weight and size, he found it was able to stay on course. "It just leans a little more" than larger drones, he said, it doesn't wobble.

Of course, falling drones are just one scenario. Getting sliced across the face with a buzzing propeller could be another worry. Take-off and landing are still going to be challenging for any drone, though Schulman indicated that while getting whacked with a drone propeller is not a recommended activity, it may be somewhat less serious a harm than one would imagine, in DJI's experience. (The Mavic comes with propeller guards that can be snapped on to protect against such a situation.)

ZDNet asked Schulman, the policy guy, about the persistent mistrust and antipathy toward drones that exists in the culture to an extent. He asked for an example. One example, ZDNet suggested, was people sunbathing in their backyard, and having a drone with picture-taking capabilities suddenly appear overhead, spying.

Adam Lisberg, head of corporate communications, chimed in that the scenario is the most oft-cited fear of drone critics. Schulman pointed out that DJI is the first drone maker to adopt something called "remote identification" throughout its product line. Remote identification is a way to remotely, wirelessly query the drone to find out things such as serial number, and even where its pilot is standing.

Someone who doesn't like nosy drone pilots could find out the drone's owner and have the police chase him down, suggested Shulman. This will be widely available someday, he suggested, probably a thing you can do with a smartphone app, similar to how people now look up Wi-Fi networks with their smartphone.

"By December, I think you'll see a proposed rulemaking that addresses remote identification" from the FAA, said Schulman.

Coming to midtown Manhattan is less of a certainty. New York, like many places in the world, has its idiosyncrasies. The city code includes what's called "Avigation" laws (like navigation but by air, not sea).

The code says that "it shall be unlawful for any person navigating an aircraft to take off or land, except in an emergency, at any place within the limits of the city other than places of landing designated by the department of transportation or the port of New York authority."

Hence, the Mini won't be the first drone you fly down 5th Avenue at rush hour or any hour. But having fun in your cramped New York apartment just got a lot more convenient.

Mavic Mini ships November 11th and is priced at $399 including the wireless controller. A "combo" version for $499 comes with three batteries and a charging "hub" and carrying case.