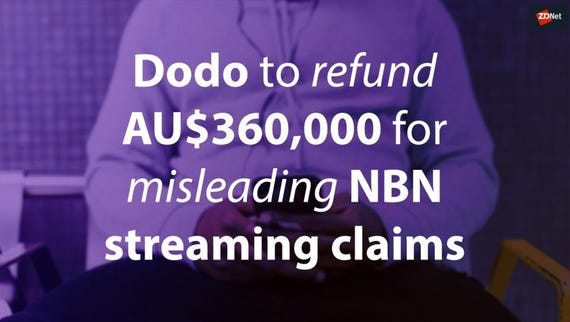 Vocus subsidiary Dodo has agreed to refund up to AU$360,000 to around 16,000 customers for providing misleading claims about its entry-level NBN broadband plans.

The refunds are part of a court-enforceable undertaking made to the Australian Competition and Consumer Commission (ACCC) after Dodo admitted that its use of the statement "perfect for streaming" was likely to be false or misleading.

The misleading statement was used in Dodo's advertising campaigns for certain NBN broadband services from November 2015 to March 2018, including plans that could only provide maximum speeds of 12Mbps. Some of these plans also only provided 10GB of data per month.

"We were concerned that Dodo customers on these plans could not reliably stream high quality video, particularly when others in the household were using the internet at the same time. At 12Mbps, Dodo's customers could not stream ultra HD video at all," ACCC Chair Rod Sims said.

"According to Netflix, high definition streaming uses up to 3GB of data per hour. With these plans a customer would have to pay extra if they streamed just two or three movies.

"We don't believe NBN plans with just 10GB of included data are 'perfect for streaming'".

Dodo will provide refunds to around 16,000 current and former Dodo customers that incurred excess data charges during the period when the misleading statement was used in advertisements. Customers that are still using the affected plans will be given the option to leave their plan at no additional cost.

"Doing the right thing by our customers is our focus and we apologise for our error. We want the dodo brand to stand for simplicity and fairness, and endeavour to reflect these values in all customer interactions," Vocus CEO of Business and Consumer Antony de Jong said in a statement.

"Our team will contact impacted current and former customers as soon as possible. Further, we ceased new sales of that specific NBN plan and promotion some time ago, turning our focus to offers that deliver a better experience."

Previously, Vocus-owned Dodo, iPrimus, and Commander were ordered by the ACCC to compensate customers for not providing them with the speeds they were paying for between October 2015 and June 2017. In total, 1,912 iPrimus customers, 3,384 Dodo customers, and 565 Commander customers were offered remedies, including moving to a lower-speed plan with a refund, or exiting their plan with a refund and no fees.

After having two potential buyers walk away from acquiring Vocus last month, the company announced last week it had split its operations into three independent businesses as part of its three-year turnaround strategy. Vocus chief executive of Enterprise and Government Andrew Wildblood said at the time that Vocus had "underinvested the past two years", but its turnaround strategy would simplify around 90 products and remove around 50 products to improve customer experience.

It also said last week that it believed the NBN complements its long-haul fibre network. On the retail side, the company said in February that the variable nature of NBN's CVC pricing model was incompatible with the fixed rates paid by consumers, and that the economics did not stack up.

The ACCC, meanwhile, has kept busy with its crackdown on NBN retailers providing misleading claims, having found that Optus misled consumers about needing to migrate to NBN a fortnight ago. Optus has since acknowledged it misled customers about the need to migrate to the NBN and apologised to customers who received the email.

The consumer watchdog has stated on numerous occasions that broadband consumer issues are a major focus, having explicitly warned NBN retailers last year that it would continue to step in if consumers were misled about broadband claims.

"Consumer issues in the provision of broadband services, including addressing misleading speed claims and statements made during the transition to the NBN, have become one of the ACCC's most prominent issues in the past two years and highlights the importance of both our consumer and competition focus," Sims said at the time.

The consumer watchdog is concerned that it has yet again had to file legal action against Optus for alleged misleading conduct.

Reported losses from NBN scams increase by nearly 300% in 2019: ACCC

Consumers lost more than AU$110,000 each month in the January to May period.

ACCC on TPG-Vodafone: Consumers need the benefits of vigorous competition

As the two telcos head to the Federal Court of Australia to push for their merger to be given the green light.

Vodafone Australia is sitting around the level of Aussie Broadband and MyRepublic in the latest ACCC Wholesale Market Indicators Report.