Full Bio
Posted in IT Iberia on November 8, 2018 | Topic: Innovation 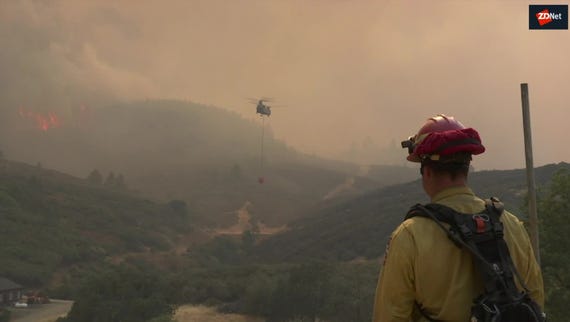 California: Drone pilots warned not to fly until wildfires are under control
Watch Now

Juan Carlos Sesma wants to reverse climate change by planting 10 billion trees in 10 years. That would be the equivalent of giving every inhabitant of the planet his or her own tree to help create healthy air.

He wants to make this laudable objective possible by using data analytics, drones, and an intelligent seed, or Iseed, containing "all the necessary nutrients".

Three years ago, when Sesma was living in Bogotá, Colombia, he made a major change in his life. He quit his job in process optimization to focus on the development of a product to improve people's life on a large scale: CO2 Revolution was the result.

The startup, based in Mélida in Navarre and Madrid, Spain, offers its services to organizations and institutions wanting to replant after wildfires or to reforest large tracts of land to offset carbon footprints. And the company says it can do it in hours and at a low cost.

"The traditional planting method is slow, expensive and inefficient. We can create ecosystems 1,000 times faster for a 10th of the cost," Sesma tells ZDNet.

First, the startup's software analyzes the native species in each location as well as the soil and climate they need.

Then these parameters are used to create an Iseed biodegradable capsule, which contains a germinated seed together with components such as fertilizers, water, and pesticides against potential predators to ensure the viability of the seedlings "with an 80 percent chance of success".

Then drones use GPS to conduct the planting process, with tanks containing 2,500 Iseeds, following plans created by the analytics software in accordance with regulations on drone use. In Spain, flights always have to be carried out in direct line of sight, so the drone is never more than 500m from its operator.

CO2 Revolution's system has already proved useful in the Alto Tajo Natural Park in Guadalajara, north-central Spain, where the startup has released seeds of native species in a large section of the 1,200 hectares that were devastated by fire six years ago.

The planting took place in late August, and Sesma reckons that by September the plants were already growing to plan.

The company is talking with local bodies to extend the scope of the project and is open to international actions.

"With our system, California could be reforested in just a few weeks with native species," he says.

However, he believes that laws will also have to change so that those responsible for damage and pollution are held more accountable.

"Things are moving slowly in this area. We need clearer regulations, so that companies are obliged to compensate for the pollution they cause," he says.

Javier Martín-Vide, professor of Physical Geography and director of the Institute of Water Research at the University of Barcelona, says with seven billion trees in Spain, the impact of planting a further 10 billion trees in 10 years would obviously be beneficial in terms of CO2 capture or sequestration.

"However, it should be noted that it depends a lot on the species used and the age of the specimens, given that trees that have reached their growth limit hardly store more carbon dioxide. The global effect of this action is limited."

Flying drones near wildfires could kill people: Don't do it

The bottom line is simple: Flying a drone near a wildfire could cause catastrophic damage. Don't do it.

Project Owl was was born out of the idea of using technology to generate better sustainable and environmental outcomes.

AT&T is using IoT sensors to detect malicious drones, as well as unveiling a suite of blockchain solutions.

A provision in the FAA Reauthorization Act allows government officials to shoot down drones they deem a threat.