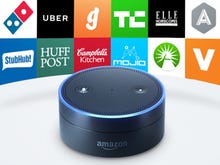 We have grown to love our two Alexas, even though they have slightly different personalities. Alexa the Younger is slower. She doesn't seem to understand us quite as well, and we often have to repeat commands even though she says "OK" the first time.

Alexa the Older is dedicated, trying hard to meet our needs even in the face of hardship, like when the Internet goes down for 20 minutes.

And yet, we're quite fond of the Alexa sisters. Alexa the Older stands guard in our media room/great room/living room while Alexa the Younger wakes us gently each morning and lives in the bedroom (where she feels safer, and is put under less stress, the poor thing).

We have an open-ish floor plan. The main room, kitchen, and little breakfast nook don't have walls separating them. Next to the kitchen is the bedroom. The two Alexas live at opposite ends of this arrangement. This means that kindly asking Alexa the Younger to do something in the bedroom works out fine, as does speaking to Alexa the Older when in our media room.

But when we're in the kitchen or the breakfast nook, in direct earshot of both, giving commands to either Alexa is a challenge.

To understand this in further depth, you need to know that most of our home lighting is now controlled by the Alexa sisters. We actually 3D printed and installed an attractive cover over the light switch in our breakfast nook (which is where we also eat dinner, so why it's called a "breakfast nook" has never been clear) so Alexa can manage the Hue bulbs without us accidentally flipping the switch and turning off the power.

But standing in the kitchen or the let's-just-call-it-the-nook and commanding, "Alexa, turn on breakfast nook" often results in Alexa the Older turning on the nook and, for some reason, our slightly addled Alexa the Younger turning it right back off.

They overhear each other. Sometimes this results in hilarity, because they don't necessarily hear perfectly well, and so sometimes we'll hear mumbling or frustrated questions coming from the other room.

All this brings me to the Amazon Echo Dot. The Dot is supposed to be an Echo that you can place in almost every room. The idea is you connect the Dots. It's clever really.

The only problem is that until very recently you could only choose between two wake words: "Alexa" and "Amazon." I just couldn't bring myself to constantly ask Amazon to turn the lights on and off -- too much like having Big Brother in the house.

It would be easier to be able to give each Echo device its own name, so that we're not shouting the same name across rooms, and causing the various Echo devices to conflict with each other. 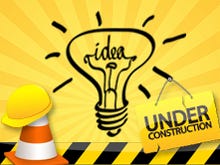 Amazon, to a small degree, seems to have realized that. The wake word "Echo" seems to be new. I checked with fellow ZDNet columnist (and Echo aficionado) James Kendrick and he also doesn't recall "Echo" as a wake word before now. If you go to echo.amazon.com, then Settings, and choose your device, you can now set "Echo" as a wake word.

But I contend that's not enough. Calling Alexa the Younger "Echo" might reduce the confusion between our two Alexas, but what if we decide to add a Dot to the kitchen? Or one in the gym? Or one in the craft room? Or one in my workshop? That is the idea of the Dot, after all, isn't it?

If we did that (assuming I could convince my wife to let me buy a total of six Echo or Dot devices), there would still be confusion. I might call some "Echo" and some "Alexa," but inter-device confusion would still take place.

That's why it's important for Amazon to add a bunch of new wake words. I understand the challenge of having them be words not always used in day-to-day activities, but Alexa is even a problem there.

Have you ever been watching TV, have an Echo commercial come on, and have your Alexa respond to the people talking to their Alexa on TV, as if they were in the room with us all issuing the commands? It can be amusing.

My point here is simple. I call on Amazon to give us more wake words. Want motivation? It's likely that multi-device owning customers will have discovered the conflict I described above. There's no way we'll add a new kitchen Echo now -- fights would break out among the Alexas. But if there were more wake words, we'd buy more devices. So would millions of other Echo owners. I'm sure of it.

While we're looking at names, my wife would like it if there was also a male voice. It only seems fair. In order to help Amazon out, we put our heads together and come up with a series of wake words that might be suitable in a dual-gendered Echo world (extra points if you mention the source for each name in the comments below): Alfred, Alice, Barrow, Bates, Benson, Carson, Cinderella, Dottie, Geoffrey, Hazel, Higgins, Jarvis, Lurch, and Rosie.

By the way, there comes a point where you are so used to the Echo that, well, I found myself saying "Alexa," and then gesturing at the lights. Like I expected her to see me and turn them on.

Hmm... maybe that will be a feature in next year's model. They could call it the Echo Eye.

Our Alexas are supposed to speak responses. That's a big part of their charm.

Join Discussion for: Dueling Alexas: With the Amazon Echo Tap...