Founder James Dyson said the company will focus on manufacturing solid state batteries instead.
Written by Aimee Chanthadavong on Oct. 10, 2019 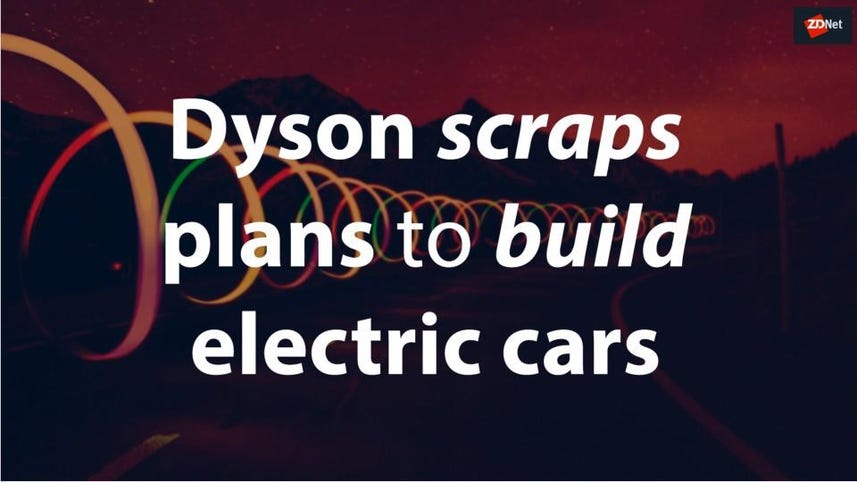 Dyson Automotive has announced that it will be scrapping any further plans to build electric cars.

In a statement, Dyson Automotive founder Sir James Dyson said despite efforts during the developmental phase of the project, the company has been unsuccessful in making electric cars commercially viable, assuring it was not due to product failure.

"We have been through a serious process to find a buyer for the project which has, unfortunately, been unsuccessful so far," he wrote.

"I wanted you to hear directly from me that the Dyson Board has therefore taken the very difficult decision to propose the closure of our automotive project."

Dyson had originally set its sights on launching an electric car by 2020.

Despite exiting from its plans, Dyson said the company will continue with its £2.5 billion investment program into new technology, including focusing on manufacturing solid state batteries and other technologies, such as sensors, vision systems, robotics, machine learning, and artificial intelligence.

"Our battery will benefit Dyson in a profound way and take us in exciting new directions. In summary, our investment appetite is undiminished," he said.

The company also plans to continue to expand its global operations, particularly in the United Kingdom and Singapore.

Reports by the BBC indicated the electric car division employed 500 UK workers. The company said it will now find alternative roles for those affected, highlighting there's "sufficient" vacancies to absorb them into its Home business.

Earlier this year, Dyson, one of the most prominent Brexit backers, announced the company would move its global headquarters to Singapore to better support its manufacturing operations, which primarily resides in the region.

CEO Jim Rowan told UK media that the move was not motivated by Brexit or tax, but was about future-proofing the company's business. He added that there were significant revenue opportunities in Singapore and the region.

Rowan, as quoted in a BBC report, said: "We have seen an acceleration of opportunities to grow the company from a revenue perspective in Asia. We have always had a revenue stream there and will be putting up our best efforts as well as keeping an eye on investments."

"The tax difference [between being based in Singapore and the UK] is negligible for us," he noted, adding that the company would be registered in Singapore.

At the end of last year, Dyson had announced plans to build a manufacturing plant in Singapore dedicated to producing electric vehicles. It was slated to be a two-storey facility and would have been the first facility of its kind for the company.

The company reported profit climbed 33% to £1.1 billion for 2018, breaking the billion dollar mark for the first time.

Slated to complete in 2020, the two-storey manufacturing facility is part of the UK company's £2.5 billion (US$3,25 billion) global investment in new technology and plans to launch electric vehicles.

Dyson 2018 profit breaks $1B, to move global HQ to Singapore

Fuelled by "soaring demand" across Asia, the UK consumer electronic manufacturer sees its profits climb 33 percent to cross £1.1 billion (US$1.42 billion) for the first time last year and will move its global base to Singapore to better support its manufacturing operations.

Called Shell Recharge, the electric-vehicle charging service currently is available at a single Shell station in the country at SG$0.55 per kWh with another nine stations to be suited up by October.

Electric Vehicles
AWS Private 5G: Want to build your own 5G network? Now you can