The new image search feature lets shoppers use a photograph to find products for sale on the site.
Written by Natalie Gagliordi, Senior Writer on July 26, 2017 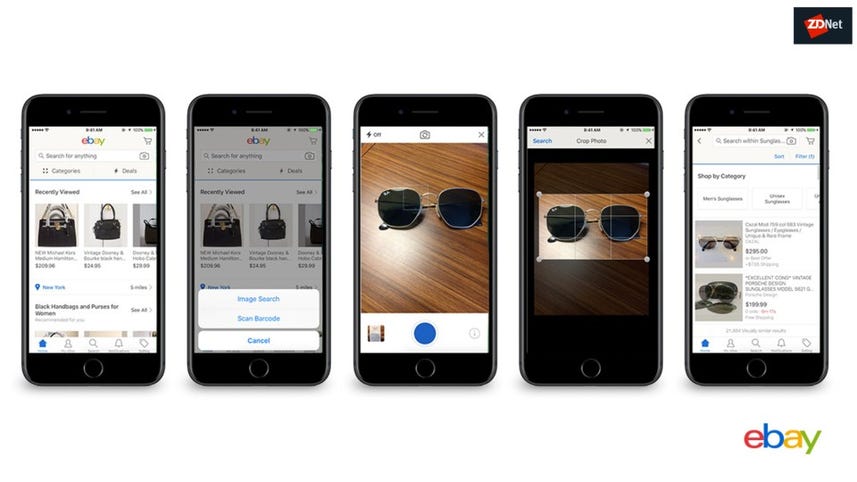 eBay is rolling out a new visual search feature that lets shoppers use a photograph to find products for sale on the site.

The Image Search feature uses computer vision and deep learning to compare images that a shopper uploads to the eBay app to the images of live listings on eBay. The system then ranks the results based on visual similarity and displays them for the shopper.

It's a pretty impressive feat for eBay, considering it has more than one billion active listings on its site at any given time, and its marketplace is frequently maligned for being difficult to search through.

The technology behind eBay's Image Search feature was developed in 2015 during the company's annual Hack Week event. Since then, a designated team of engineers has been working to incorporate more AI-based services into eBay's ecommerce experience. In a blog post, eBay indicated that it plans to launch additional computer vision products "in the coming months."

eBay also announced something called Find it on eBay. It's conceptually similar to Image Search, but instead of pasting photos into the search bar, shoppers can share URLs with eBay, and then the eBay mobile app will surface listings of the product.

"At eBay, we're focused on creating new complementary technology that helps our millions of shoppers easily find the things they love at the best value," said Mohan Patt, VP of Buyer Experience at eBay. "eBay Image Search and Find It On eBay make it possible for people to shop eBay using any image or photo that inspires them."

eBay said Image Search will arrive on the eBay app for both Android and iOS this fall, whereas Find it on eBay will launch exclusively on Android.