We take a hard look at the Elegoo Mars 2 Pro. Will it be just as good as Elegoo's previous machines? Will it be better? You'll have to read the article to learn more. But here's a hint: it's pretty sweet.
Written by David Gewirtz, Distinguished Lecturer on July 27, 2021 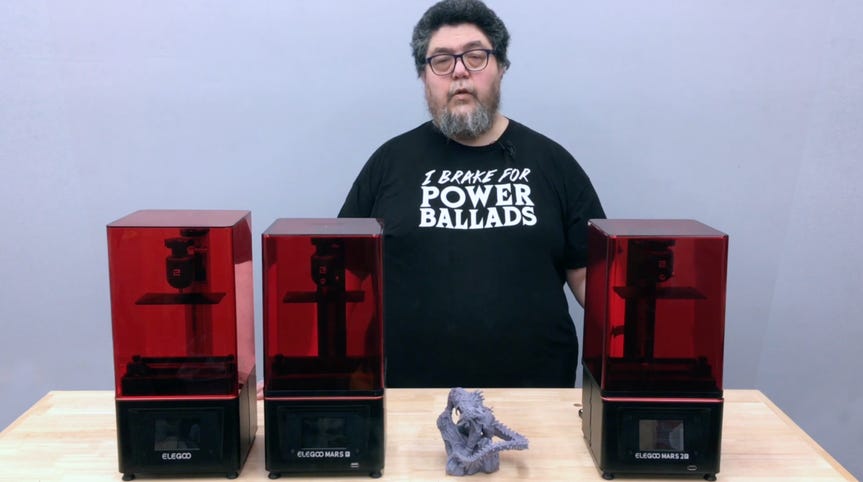 Welcome to ZDNet's DIY-IT project lab, where I'm testing resin 3D printers for your entertainment and edification. Today, we'll be looking at the Elegoo Mars 2 Pro, the third in the series of compact Elegoo printers I've reviewed.

Also: Hands on with resin 3D printers: We put the Elegoo Mars, Mars Pro, and Zortrax Inspire to the test

I've subjected each candidate machine to a series of performance and quality tests. Beyond that, I look at the setup, the user experience, and even how the finished prints look under the microscope.

Packaging for the Mars 2 Pro sent to me by Elegoo was every bit as solid as the previous two Elegoo printers I've reviewed. Everything arrived intact, and the setup was a matter of just removing the protective packaging and plugging it in.

They both have a rubber gasket to help manage the fumes. They both have a built-in carbon filter, helpful in reducing the fumes released by the printer. Both have a new stepper motor and rail system that are more robust and less noisy than on the original Mars.

Now, here's where they differ. The Mars Pro has an RGB screen, which it uses to activate and solidify the resin. The Mars 2 Pro has a monochrome screen. This is actually a big deal.

With this class of resin printers, the entire layer is cured at once. The screen underneath the resin vat lights up, UV light cures the layer, then the layer lifts up, and the whole process repeats.

The thing is, earlier resin printers used pretty much off-the-shelf RGB screens. These were basically smartphone screens, whose wide availability made them affordable for use in resin printers. The gotcha is that only the blue light (of the red/ green/ blue of RGB) actually cures the resin. The red and green lights don't produce the right UV wavelength, so they mostly block the light. That means that two-thirds of the light produced had no effect.

Pricing and availability for this class of machine tend to vary. These printers tend to show up on Amazon and the vendor's site, sell out, and then become available again later. The RGB Elegoo Mars Pro is about $200, while the Mars 2 Pro is about $300. If you can go the extra hundred bucks, it will be worth it.

For resin 3D printing, the result is clear: if you can afford a monochrome printer and can find one to order, get it.

As for this monochrome printer, the accompanying video showcases what it can produce. As a base for comparison, I've been using a little miniature foot soldier, designed for support-free SLA printing by Thingiverse contributor BriteMinis.

The soldier, and all of the prints on the Mars 2 Pro, have been printed using water-soluble resins, like this from Elegoo, almost completely eliminating the problems associated with sourcing, handling, smelling and breathing in isopropyl alcohol. There is still an issue regarding the disposal of dirty water, but that's a discussion for a different day.

When you watch the video, you'll begin to see the detail this printer is capable of with a wonderful pack bear by Clay Rade, who posted it on My Mini Factory. You can see its size in comparison to the penny and just look at that incredible detail.

While I've never played games with miniatures, I have a great deal of respect for the amazing models produced by artists and designers. My plan is to spotlight a different artist with each resin printer I review. This month, I decided to support designer OnePageRules on Patreon. These models come pre-supported, which saved me a lot of time getting these prints ready to test.

You'll see I printed a little guy with a gun in the video, which turned out awesome. You can see the detail from the close-ups of the face, his weapon, and even the pack that's on his back.

I then went on to print a large dragon figurine. This, I had to print in sections.

The dragon thing shown in the accompanying video is what the designers call a Change Daemon. No, it's not a background process. Instead, it's an amazing print that took me days to print overall.  You can how amazing it looks once glued together. Definitely check out the video to get a great view of these prints.

So that's the Elegoo Mars 2 Pro. It took me a while to dial in the settings to be able to produce this level of detail, especially for the heavy parts. The trick is increasing the exposure time for heavier items, making them more secure on the build plate. But once I got it all figured out, the results are pretty astounding.

So what's the bottom line? Simple. This is a great little machine. If you want to make resin prints and you can afford the few extra bucks for the monochrome screen, the Elegoo Mars 2 Pro will get the job done very nicely.