Steadicams - a purely mechanical device - have been around for decades. A few years ago the first electronic stabilizer - using tech similar to Segways - debuted at an eye-watering $15k price. 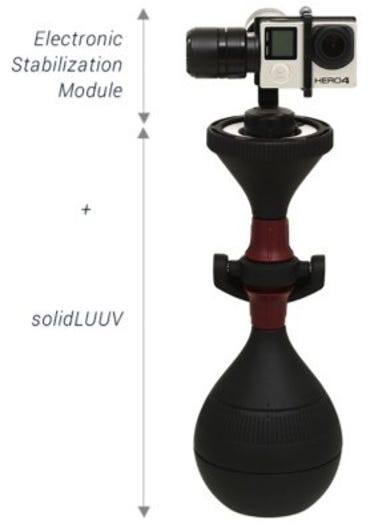 Prices have dropped quickly, and now you can get one for an action cam or smartphone for less than $300. Now a German company, LUUV, is gearing up to offer a stabilizer that combines mechanical and electronic stabilization.

Luna showed a tennis-ball sized camera consisting of two 180 degree cameras back to back. The camera's processor can roughly stitch the videos together, or a smartphone app will do a high-quality stitch.

Intended for VR applications, the gyro-stabilized camera is waterproof and wi-fi equipped. It is available for pre-order from Indiegogo for $300.

Enlaps - a French company - is Kickstarting a solar-powered, panoramic, weatherproof, time-lapse camera. Imagine having a week's worth of time-lapse footage - without having to tend to the camera all the time.

Video is quickly displacing text on the web - at least as far as capacity and immediacy are concerned. The growth of consumer products that provide professional results is a good thing for producers and viewers alike.

With entire theatrical release movies being shot on iPhones, you can shoot amazing things on a very low budget. These new tools make it even easier to get high-quality results, if you know what you are doing.